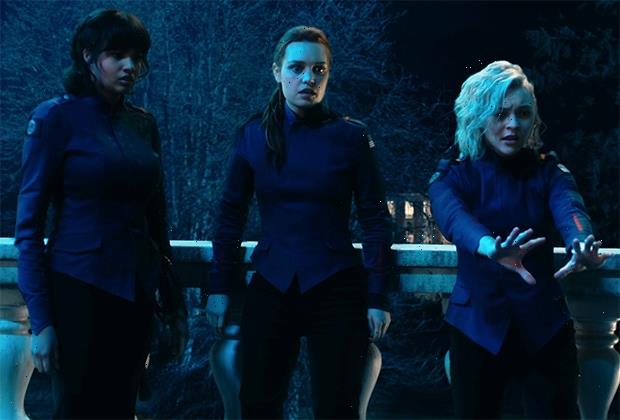 Motherland: Fort Salem just set the stage for a hell of a final season.

Tuesday’s brutal finale, which brought Season 2 to an explosive conclusion, claimed the lives of several key characters — even if they aren’t all staying dead.

Picking up where last week’s cliffhanger left off, Fort Salem remained very much under attack by the Camarilla, with the witch plague spreading faster than anyone could hope to contain it. Penelope was eventually discovered to be the source of the infestation, forcing Raelle and Abigal to do the unthinkable and witchbomb the poor girl into oblivion.

Sadly, Penelope wasn’t the only witch who lost her life this week. An injury sustained during her battle with the Camarilla also proved fatal for Alder, who clung to life long enough to exchange some incredibly emotional goodbyes. Abigail thanked Alder for turning her into a leader, Raelle acknowledged how hard Alder pushed her to face her darkness, and Tally credited Alder with inspiring her to always pursue the truth. (OK, that last one kinda-sorta blew up in Alder’s face, but now isn’t the time for that.)

But rather than allowing the witches to celebrate their victory over the Camarilla, the White House sought to arrest those responsible for Penelope’s death, a decision General Bellweather was unable to overturn during a tense trip to the Capitol.

Still, the witches weren’t about to let three of their own — four if you count Nicte Batan, who also fought by their side — go down for this supposed war crime. Through the combined efforts of Adil’s earth-moving and Scylla’s manipulation, the prisoners were freed while en route to receive their punishment.

The great escape led to several sweet moments, including a particularly romantic exchange between Raelle and Scylla. “I don’t want to be apart from you anymore,” Raelle said, to which Scylla replied, “Me neither. Like, ever.” Cue the big kiss! Honestly, between this and the “I love you”s that Raelle and Scylla swapped earlier in the hour, this episode was a treat for fans of this couple. #RaellaForever!

Bellweather and Quartermaine also arrived on the scene to provide an escape route for everyone, but even Bellweather admitted to her daughter that she’s “scared s–tless” about what’s to come. For now, we can just cross our fingers and hope that all goes well for a bus full of fugitives. Wouldn’t be the first time!

As if all of that wasn’t enough, the finale ended with a one-two punch of potentially game-changing twists: First, we learned that Vice President Silver worked with Alban Hearst to orchestrate his own daughter’s death. Not cool. The other twist, which is considerably more cool, is that Alder appears to have become one with the Mycelium and is… regenerating? I thought her death came too easily, so I wasn’t surprised — but definitely pleased — when she opened her eyes at the end of the hour.

Your thoughts on Motherland: Fort Salem‘s finale? Hopes for the (gulp) final season to come? Grade the episode below, then drop a comment with your full review.