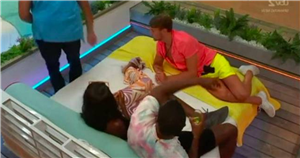 It’s no surprise that Love Island is an edited show to help create drama and fans are well aware that this is true as ITV attempt to make things appear more dramatic and intense than they are to the contestants in the villa.

While ITV maintain a tight edit across production to keep up appearances to viewers, they appeared to let one editing mishap pass them by in the latest episode of the show as Kaz appeared out of nowhere between cuts.

Eagle-eyed fans watched as Hugo, Liam and Aaron had a discussion on the daybeds after Danny and AJ were dumped from the island.

But as the trio got up to depart from the conversation, Kaz had suddenly appeared in the middle of the bed next to Aaron.

Aaron suddenly had his arm around Kaz as they all began to get up from the bed, with fans of Twitter confused by the surprise appearance.

One fan wrote: “Where did Kaz come from, I’m so confused?”

A second asked producers to “at least try” after asking: “where did Kaz come from?”

A third commented with cry laughing emojis as they said: “I’m sorry, but where did Kaz come from… she was not in between Aaron and Liam." A final tweet said: “Nahhh what sort of editing?! How did Kaz appear in between the boys like that?”

As Love Island has to work quickly to turn around episodes of the recent goings on in the villa, fans found it hard to let this editing fail slide while watching the show.

Kaz has recently begun to form a relationship with new boy Tyler in the villa after the pair hit it off following Liberty playing cupid to pair them up.

While Kaz and Tyler seem to be progressing quickly through their romance, the preview for tonight’s episode of the show has divided fans over who Kaz may be kissing in the preview.

While some fans were excited that Kaz and Tyler may be locking lips tonight, a number of fans thought that it looked like Aaron’s hand that was placed on Kaz’s hip in the preview.

One said: "I don’t think that’s Tyler at the end of yesterday’s ep. I reckon it’s Aaron that Kaz is smooching."

While another speculated that if it’s Aaron then he’s a “game player” for the move after Lucinda proved to be unpopular with audiences in the latest dumping.

They said: "Having an argument about who's hand that was on Kaz last night. But if it's Aaron he's a pure game player. Seen how unpopular Lucinda is (twice) and now trying to secure his meal ticket."

Despite speculation, the clothing seems to match what Tyler had been seen wearing as he entered the villa – and we will find out who Kaz is kissing tonight!

For all your juicy updates on all things Love Island, sign up to our Factor 50 newsletter.

Love Island continues on Thursday night at 9pm on ITV2 and ITV Hub. Episodes are available the following morning on BritBox. 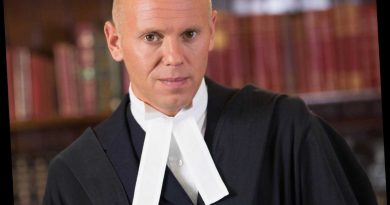 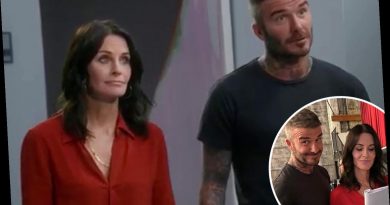 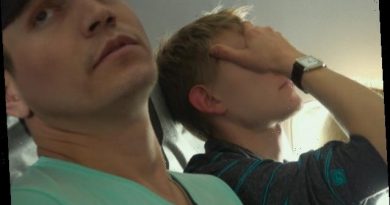