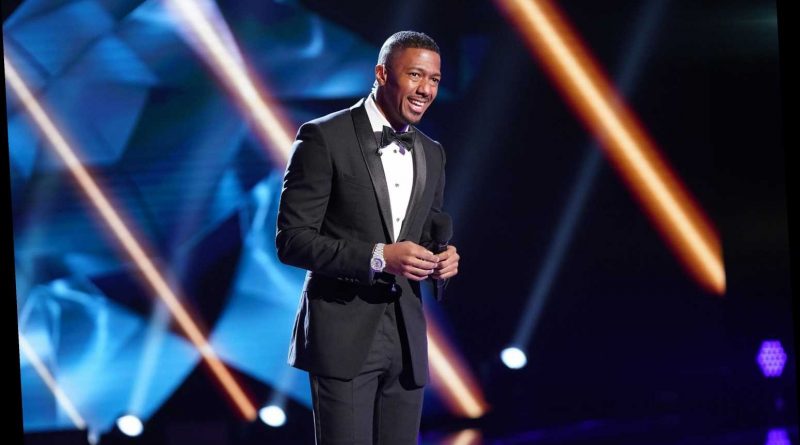 The Masked Singer is returning for its fourth season on September 23 along with Nick Cannon, who will once again host the (highly bizarre) singing competition—despite backlash following anti-Semitic remarks he made this past summer. Here’s a quick refresher on what Nick said, his subsequent apology, and what impact the controversy has had on his multiple hosting jobs.

Nick Cannon Made Anti-Semitic Remarks During His Podcast

The comments were made during the June 30 episode of the podcast “Cannon’s Class,” where Nick interviewed rapper Professor Griff and discussed anti-Semitic rhetoric and conspiracy theories about the Rothschild family. Per The Hollywood Reporter, Nick said, “It’s never hate speech. You can’t be anti-Semitic when we are the Semitic people, when we are the same people who they want to be. That’s our birthright. We are the true Hebrews.”

ViacomCBS Fired Him Over the Comments

ViacomCBS (the parent company of MTV and TeenNick) fired Nick from his position as executive producer/chairman of TeenNick, as well as from his hosting and EP positions on Wild ‘N Out.

The company said the following in a statement:

The Masked Singer host tweeted an apology on July 13, saying “Anyone who knows me knows that I have no hate in my heart nor malice intentions. I do not condone hate speech nor the spread of hateful rhetoric. We are living in a time when it is more important than ever to promote unity and understanding.”

Anyone who knows me knows that I have no hate in my heart nor malice intentions. I do not condone hate speech nor the spread of hateful rhetoric. We are living in a time when it is more important than ever to promote unity and understanding.

Until then, I hold myself accountable for this moment and take full responsibility because My intentions are only to show that as a beautiful human species we have way more commonalities than differences, So let’s embrace those as well as each other. We All Family!🙏🏾

On July 15, he followed up this tweet with multiple Facebook posts, including an expression of his “deepest and most sincere apologies” to the Jewish community. He also explained that he’d been in touch with Rabbi Abraham Cooper, and said he realized that his comments furthered “hateful propaganda and stereotypical rhetoric.” 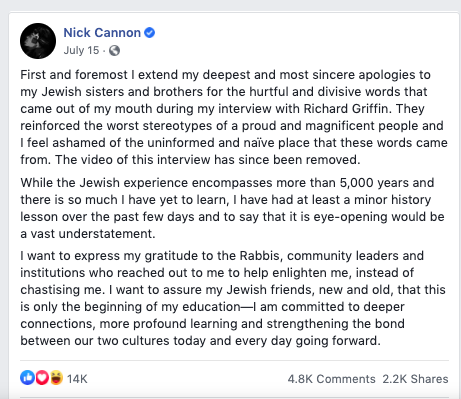 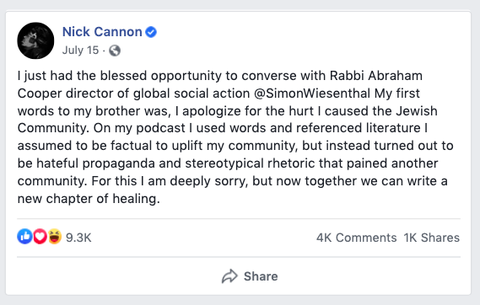 Nick went on to criticize ViacomCBS for firing him in a lengthy post, a portion of which follows:

He also issued an additional apology to the Jewish community, and ended his post saying “I demand full ownership of my billion dollar Wild ‘N Out brand that I created, and they will continue to misuse and destroy without my leadership! I demand that the hate and back door bullying cease and while we are at it, now that the truth is out, I demand the Apology!”

ViacomCBS Said They Hope to Work with Him Again

In late August, ViacomCBS president of entertainment and youth brands, Chris McCarthy, implied that the company wants to work with Nick again, saying he was “hopeful” they could find a way to rebuild their partnership.

Fox Announced That They’d Stand Behind Him

Fox (which airs The Masked Singer) released a statement of support for Nick on July 15, revealing that they had no plans to cut ties with him over his comments:

He Took Time Away from His Radio Show

On July 16, Nick revealed that he’d be taking some time away from his radio show in order to “commit myself to deeper, more thorough reflection and education.” He returned to the show in early September, saying, per Variety, “Tough times don’t last, tough people do. I’ve been going through it and I’ve been growing through it. As we’ve been saying—we atoning, y’all. We making the right decisions for 2020.”

Morning radio family. I have decided to take some time away from my radio show so I can commit myself to deeper, more thorough reflection and education.

Meanwhile, Cannon’s daytime talk show was pushed to 2021. The show’s producer Debmar-Mercury confirmed this on July 17, saying, per Variety, “The ‘Nick Cannon’ talk show will not debut this year. After conversations with Nick, we do believe that his public comments don’t reflect his true feelings and his apology is heartfelt and sincere. We want to continue the healing process as he meets with leaders of the Jewish community and engages in a dialogue with our distribution partners to hear their views. We are standing by Nick in our hope that by fall 2021 he will be able to use his extraordinary talent and platform to entertain, enlighten and unite his audience on the ‘Nick Cannon’ talk show.”

We’ll be updating this article when/if more information comes out about the status of Nick’s various projects. Until then, tune into The Masked Singer on Wednesdays. 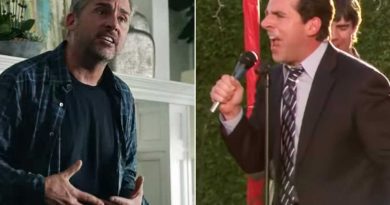 The Morning Show trailer is reminding everyone of The Office 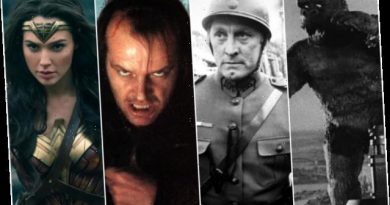 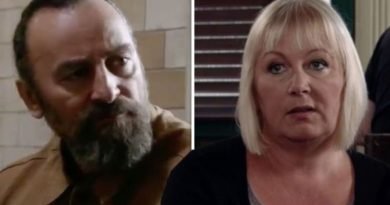 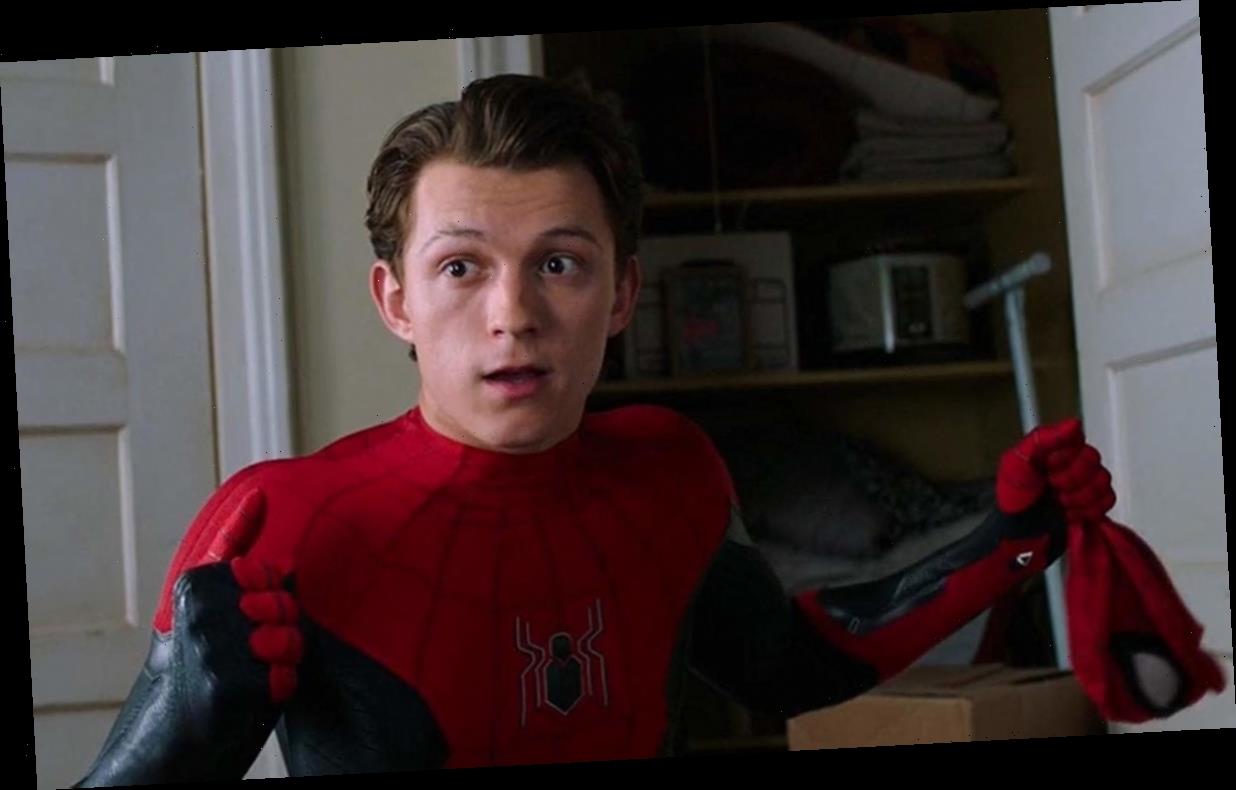