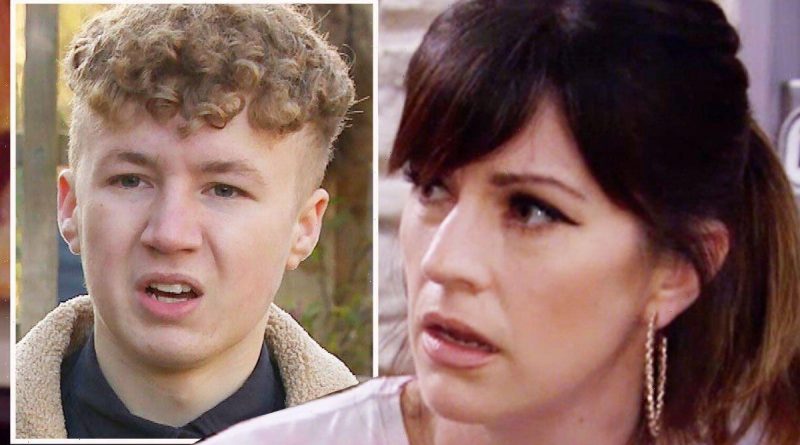 Emmerdale: Kerry Wyatt helps Daz Spencer to get a makeover

Kerry (played by Laura Norton) has been keeping her head down in recent months on Emmerdale, with the former troublemaker focussing on domestic problems rather than criminal ones. Having returned to the ITV soap after a hiatus, she still harbours the guilt of being behind the death of Frank Clayton (Michael Praed) but she is trying to become a better person. However, after discovering what Noah Dingle (Jack Downham) had been doing to her surrogate daughter, Chloe Harris (Jessica Elland), over the past couple of months, it seems she could be forced to return to her old ways in order to get rid of him once and for all.

Tuesday’s episode was dramatic as Noah’s stalker secret was finally unveiled by Chloe, who found tonnes of evidence on his laptop.

As he tried to reason with her and explain why he had been taking pictures of her, things turned heated as he wouldn’t let her leave his house.

When he tried to put his hand around her mouth to stop her from screaming out, his mother Charity Dingle (Emma Atkins) walked in.

After berating her son, she headed to find Chloe as she wanted to make sure the teenager was ok and was not going to call the police.

Although she didn’t report her stalker to the authorities, she did end up finding her surrogate mother and her partner, Al Chapman (Michael Wildman) in the café.

Clearly upset, the young woman struggled to explain to Kerry what had happened and it wasn’t too long before they were interrupted by Charity.

With Noah’s mother trying to save her son, she was relieved to hear Chloe hadn’t called the police but Kerry wanted to be put in the picture.

Mustering up the courage to speak, the teenager said: “I found a load of photos on Noah’s laptop of me. He’s been taking them secretly.”

“Perving?” Kerry asked, with Chloe adding: “I kept noticing Noah everywhere I went and it’s because he’s been tracking me. He’s been in my room recording what I say.”

“Is this a joke?” her surrogate mother replied before Kerry learnt the full extent of Noah’s obsession with his love interest.

Chloe added: “He has lists of things I like. I was going to bring you the laptop but then he caught me on it and then I tried to run and I fell.

“He put his hand over my mouth and wouldn’t let me go,” she continued as she tried to hold back the tears, feeling scared of Noah.

“He’s not a monster,” Charity declared, with Kerry hitting back: “What? Because he’s your kid?”

Al said his two pennies worth as he remarked: “He’s 18. He is an adult,” hinting Noah would be prosecuted as an adult and not a child.

Kerry added: “And who makes excuses at any age? I should have trusted my gut. He raided Gabby [Thomas’] knicker draw. As if he’s going to stop being a creep.”

This was a big hint she would need to do something massive to ensure Noah was taught a lesson and wouldn’t go near Chloe again.

“He’s dangerous. We’re going to have to report this,” she continued, clearly trying to go through the proper channels to get revenge.

Piping up again, Charity made a case for her son as she said: “Listen to me. I’m his mother, he’s my responsibility. Let me talk to him, he’s at home now bricking it.

“I will deal with this, I swear,” she commented, pleading with Chloe to let her handle it rather than getting the police involved.

How well do you know your British soaps?

How many times has Ian Beale been married in EastEnders?

What is the name of Bianca Jackson and Ricky Butcher’s son on EastEnders?

On EastEnders in 2002, who accidentally ran Jamie Mitchell over in his car which caused his death?

How many times has Corrie’s Steve McDonald been married?

What happened to Emily Bishop in Coronation Street?

Who murdered Maxine Peacock in Coronation Street in 2003?

Which incident in 1993 killed off four characters in Emmerdale?

When did the show stop being known as Emmerdale Farm?

On what date did Hollyoaks air its first episode?

What was the name of the much-loved Coronation Street pet dog who was put down in April 2020 after 14 years?

1996 saw the arrival of one of Hollyoaks all time bad boys and rival of Kurt Benson, but who was he?

Who is the longest serving character on Coronation Street?

Who shot Phil in EastEnders?

How many fires have there been at Corrie’s Rovers Return?

Get out of my pub, you’re no soaps fan

However, it seemed Al was already on the warpath as he quickly got up from his seat, with Kerry asking him: “Where are you going?”

“To find Noah. He needs to learn some respect and one he will never forget,” the villain replied and when he gets his hands on the young man, he could call on Kerry to come and confront him.

As she makes her way to the secret location, Kerry could be preparing to tell Noah in no uncertain terms is he ever going to see her surrogate daughter again.

But as they talk, she could discover he doesn’t actually realise his behaviour is concerning and action needs to be taken to stop him.

No one would expect Kerry to turn around and kill the younger, not even Al as he thought they were just going to scare him.

Though, he would be complicit in the murder as he would have to help his partner get rid of the body of her second victim.

Kerry would explain it would be best if they just played along with the rest of the village and presumed Noah had gone on the run.

Unfortunately, although he seems to be a hard man, Al could begin to break as he realises just how big the repercussions of killing Noah would be.

Will they get found out or will Kerry get away with murder for a second time?

Emmerdale airs weekdays at 7:30pm on ITV, with an hour-long episode airing on Thursdays. 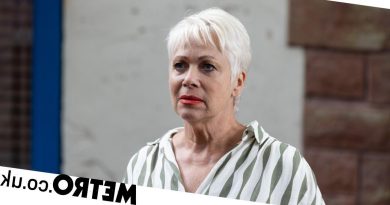 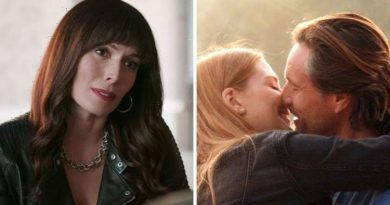 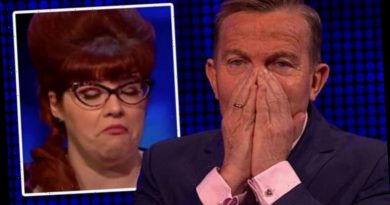