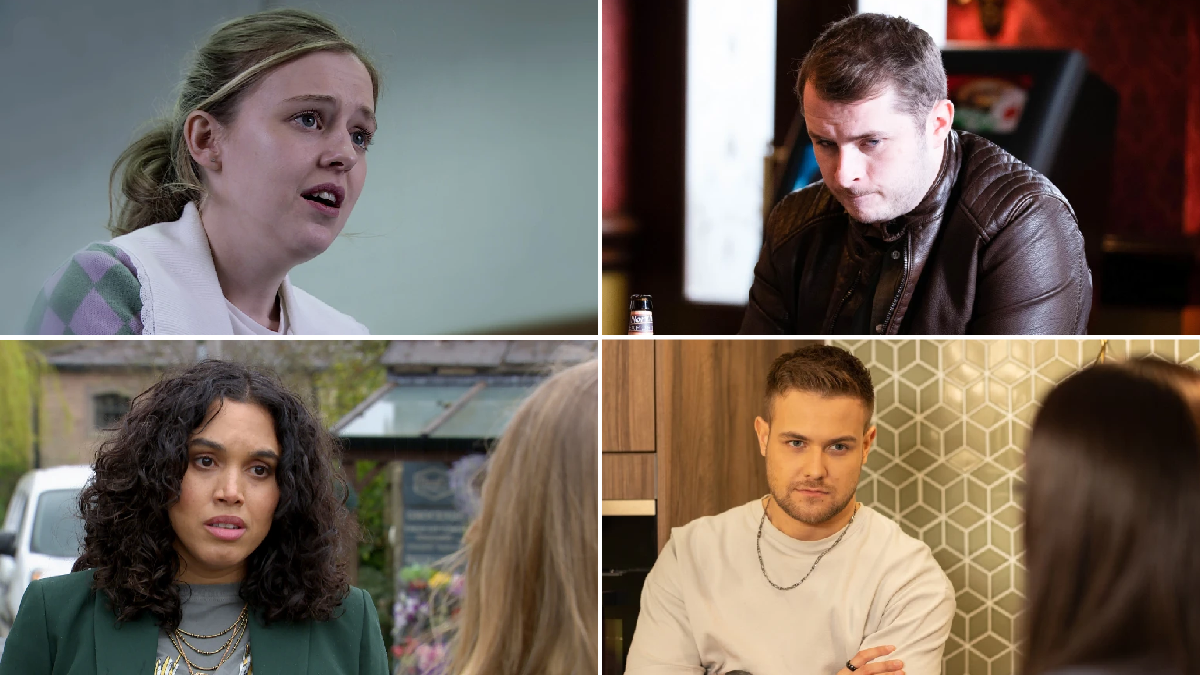 Devastating events and shock discoveries are at the centre of a major week in soapland.

Hollyoaks sees Ethan William questioned when the dead body of his ex-girlfriend Maya is found, while Emmerdale’s Suzy is questioned by Vanessa Woodfield after a discovery is made.

It’s shaping up to be an emotional rollercoaster of a week for the residents of our favourite soaps, that’s for sure.

Fancy a first look at what’s coming up?

We thought you might, and therefore, we’re bringing you all the spoilers you could possible need.

1. Tyrone’s suspicions about Phill are realised when Hope makes a discovery on his laptop. In a bid to get revenge, Hope enters the digger, and proceeds to pull the lever, sending the arm of the digger straight through Phill’s windscreen! Ty, meanwhile, picks up Fiz’s belongings from Phill’s, but a fight ensues, and the pair end up brawling in wet concrete! Phill, however, loses an engagement ring, but upon finding it, he pops the question to a stunned Fiz!

2. Abi calls at Toyah’s, asking if she can have Alfie for a full day next week. Toyah agrees, as does Imran. Abi, however, is planning on kidnapping her son, and she reveals her plan to Kevin, who admits that he’s still in love with her. Abi asks him to keep shtum, but Kevin later spots Imran in the street. Will he dob Abi in?

3. Summer secretly tips her insulin down the sink, before setting off for a maths exam. Her vision becomes blurred during the exam, and she’s horrified to realise she’s left her diabetic kit at home. Summer is subsequently loaded into an ambulance, tearfully explaining to Aadi that her blood sugar level is sky high.

4. Faye researches alternative therapies to HRT on the internet, but Beth advises her to be wary of dodgy websites, much to Craig’s dismay.

5. Tim attends his appointment, accompanied by Sally, and he explains that he’s suffering from impotence. Dr Gaddas suggests altering his medication.

6. Daniel breaks the news to Ken that he’s giving up teaching, while Nicky pays a visit to see Daisy at the pub.

7. A guy called Frank calls in the Rovers and flirts with Sean and it’s obvious he’s smitten. As Frank leaves, Jenny urges Sean to go after him

8. Ben and Callum argue, and some difficult words are shared between the two, leaving both wondering if this truly is the end of their marriage. Ben heads to The Vic to drown his sorrows, and sends messages to Lewis on a dating app. He meets up with Lewis, and flirts with him. After the Prince Albert shuts for the night, one thing leads to another, and they find themselves upstairs. Ben reconsiders having sex with Lewis, after he receives a selfie from Callum and Lexi. Lewis, however, refuses to let him go, and rapes him.

9. Callum tries to collect his thoughts but Sam passes by and winds him up, telling him she saw Ben coming out of The Albert. At their flat, Callum bluntly asks Ben if he slept with Lewis and with Ben still processing everything that happened, he doesn’t deny it. Devastated, Callum walks out.

10. Rainie discovers pills Stuart has tried to dispose of and realises Stuart has been lying about taking his painkillers. Rainie questions why Stuart would make her believe he’s addicted again but Stuart rushes off to his chemotherapy appointment and avoids Rainie. Rainie’s heart breaks when Stuart admits he has no feelings towards Roland.

11. Lola is distraught to learn that Isaac has met someone else and isn’t coming back.

12. Frankie invites Jay to Clara’s photography exhibition and when Lola spots the exchange, she gets the wrong end of the stick. Clara isn’t happy to see Frankie stealing her thunder and things get worse when Lola barges in and accuses Jay of cheating with Frankie, causing a scene. Clara enjoys the drama.

13. Mick shares his plans for the Jubilee celebrations with Sonia and Kathy but when Rocky hears, he puts his foot in it with Sonia. Desperate to rebuild their relationship, he tries to get Sonia to join in planning the event but she turns him down, thus making Rocky more determined than ever to impress her.

14. Jean refuses any care from Stacey and when Lily returns from Martin’s, Stacey is forced to put her foot down – Lily is not caring for Jean anymore.

15. Vanessa is stunned after Leyla lets slip that Suzy knew Holly, and she wastes little time in confronting her girlfriend. Suzy, feeling guilty, attempts to break up with Vanessa, but Vanessa convinces her to give their relationship another go. Leyla, meanwhile, is concerned about where she’s going to get her next fix, as Suzy tells her she’s going to start living a cleaner life.

16. Moira takes Faith to the hospital, and urges her to tell her kids about her diagnosis. Faith, however, fears that Cain will lose his temper, knowing that she kept a secret from him. Trying to be strong, Faith tells Moira to head back to the farm and she’ll let her know when she’s done. Drawn and weary after her procedure, she worries as she struggles to get a hold of Moira.

17. Noah doesn’t want to plead guilty, which stuns Charity, who does her best to convince her son to do the right thing. At court, the legal advisor reads the charges out loud. But just how will Noah plead?

18. David is determined to propose to Victoria. Eric advises against him rushing into things, but David refuses to listen, as he he heads to a shop to pick out the perfect engagement ring. He subsequently proposes to Victoria, but just how will she respond?

19. Cathy spots Amelia with a suspicious bottle. She googles the contents but finds fairly innocent ads selling Apremine. Amelia tries to distract Cathy knowing that the supplements that she’d bought are bad for her.

20. Samson attempts to reassure Amelia who feels humiliated after a negative comment was posted on a picture that she put up on her social media.

21. Ollie prepares to reunite with his estranged son, Thierry! His family urge him to tell Brooke, but he ultimately decides to keep it to himself. Cindy, however, puts her foot in it by revealing the news to Brooke, and just as they go to confront Ollie, they are faced with their son and his adoptive parents. When backs are turned, Brooke finds themselves alone with Thierry, and a misunderstanding leads to panic.

22. Ethan’s world comes crashing down, as Zoe reveals that Maya’s body has been found – and he is prime suspect! Saul, meanwhile, warns Zoe that she’s jeopardising her career by dating Sam, given that his uncle is thought be involved in Maya’s murder.

23. Norma demonstrates that she’s not one to be messed with, causing hysteria as she threatens Sienna and Warren’s children. However, it looks like she has an ulterior motive to get the attention of Hollyoaks’ most notorious bad boy.

24. The clock ticks for James: He must find money to pay back Bruce and fast! An opportunity soon presents itself, and he considers scamming one of the Hollyoaks villagers. But just who is it?

25. Shaq returns home and is full steam ahead with wedding planning, but is stopped in his tracks when he discovers just how much the day will cost.

Why Jed's Issues Matter Even If He Really Fell In Love With Hannah B.

What happened to Lizzie and Scott from Love After Lockup? 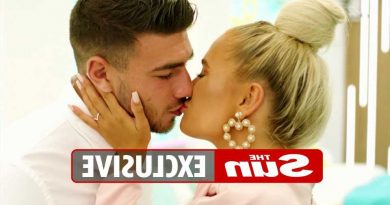