Joe Jonas and Sophie Turner caught many of their famous friends off guard with their surprise May 1 wedding in Las Vegas, including country duo Dan + Shay.

The newlyweds, who will be having a second wedding ceremony in France this weekend, tied the knot after their Billboard Music Awards performance at the famous A Little White Wedding Chapel.

“For the longest time, we weren’t sure if we could talk about it,” Shay Mooney said on the Today show Friday about performing their song “Speechless” acoustically before the Game of Thrones actress, 23, walked down the aisle.

“We were like so hush about it. They texted us a few days before,” Dan Smyers recalled. “We thought it was like a prank and we’re like, ‘Sure, we’ll do it.’ We were so DL, we didn’t tell anyone on our team. We’re like, ‘We just have this, like, engagement after the award show.'”

And the pair’s performance would’ve been hush-hush if it weren’t for Diplo, who live-streamed the ceremony on Instagram.

“We get there and our phones are blowing up and everyone’s like, ‘Diplo’s live on Instagram and he’s doing this wedding and you guys are singing. This is so crazy.’ I think still to this day we’re like, ‘Should we talk about this?’ It was so fun though,” Smyers said.

A source previously told PEOPLE that the two were planning a more traditional ceremony in Europe for this summer, but “had to get married in the States to make it legal.”

And Jonas, 29, previously opened up about not saying his “I dos” in the most conventional of settings, revealing that he and Turner had a good reason for choosing Las Vegas as their venue.

“We had to do a legal marriage before we did a real big one,” he told Harper’s Bazaar in a new interview, explaining that the couple had two options to choose between.

“It was either the courthouse, or our version, and I preferred our version,” he added. “Friends, Elvis and Ring Pops.”

Ahead of their big day this weekend, the couple has been spending their pre-wedding festivities with their guests including brothers Nick and Kevin Jonas, plus their wives, Priyanka Chopra and Danielle Jonas.

Amid record-breaking temperature highs in France and other parts of Western Europe, they all kept “cool” by the pool alongside family and friends Thursday at their wedding venue: the beautiful Château de Tourreau, where banners reading, “Sophie and Joe” with their wedding date were draped on the building’s facade.

Turner and Joe have been in France for a week now, exploring Paris as they prepare for their nuptials.

Though Dan + Shay are not expected to perform at the couple’s France wedding, Bruno Mars is reportedly performing, according to Showbiz411. 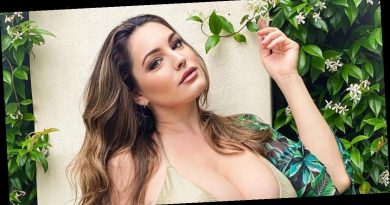