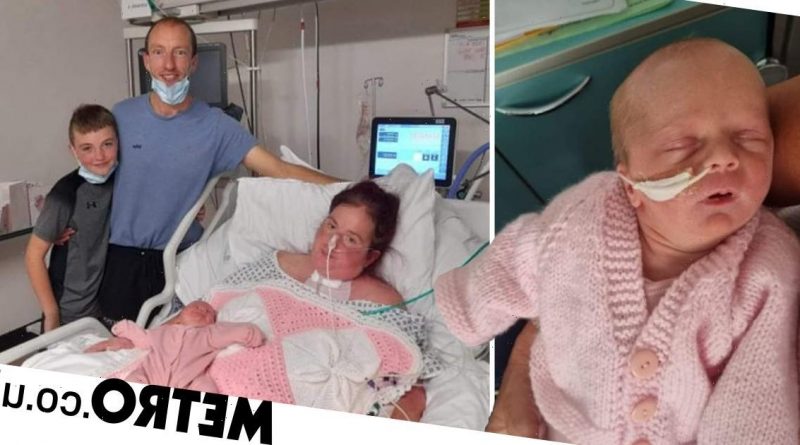 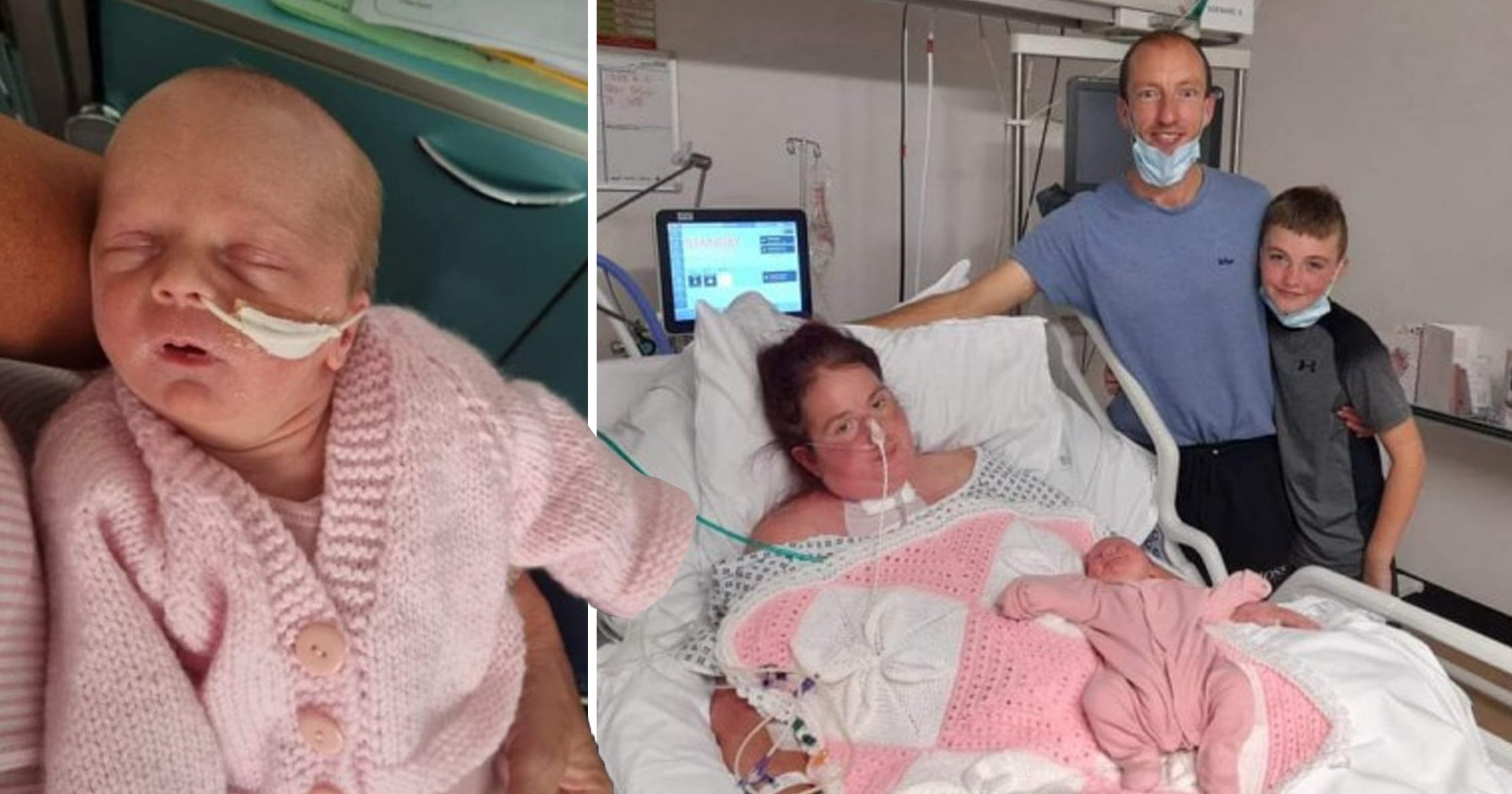 A woman who spent seven weeks in a coma after catching Covid has woken up to discover she had given birth to a little girl.

Laura Ward fell ill with the virus while pregnant with her daughter Hope.

Her condition deteriorated so much that she was sedated for an emergency C-section at 31 weeks, more than two months before her due date of October 15.

Thankfully all was well with baby, who was born weighing 3lb 7oz at Royal Bolton Hospital, and despite spending five weeks on the neonatal unit, she’s now healthy and has reached a much better weight.

But for mum Laura, it was just the beginning of a horrific ordeal that at times her family feared she would never recover from.

The primary school teaching assistant finished school for the summer holidays with just a slight cough.

A lateral flow test was negative, but when she didn’t improve, she decided to get a PCR, which came back positive.

Following the guidance to isolate, Laura found she was struggling to breathe and
after calling 111 for advice she was advised to go to hospital.

Laura, who had no underlying health conditions other than gestational
diabetes, didn’t have the Covid vaccination earlier in her pregnancy
as initially it wasn’t recommended for pregnant women. By the time she
was offered it, it was too late.

With the 33-year-old’s condition worsening over the fortnight or so in hospital, she was sent to maternity to check on baby and was told they may have to deliver early.

The last thing Laura remembers is arriving back on the Covid ward and despite
since being told that she nodded her head to give consent to Hope’s delivery, she has no recollection whatsoever.

Her partner John Leece was called to the hospital but, due to Covid restrictions, he was not allowed into the theatre.

Laura’s next memory was waking up seven weeks later, on September 30, to be greeted with the sight of the precious daughter she didn’t even
know she’d had.

‘I opened my eyes to see Hope on the bed with me, but I couldn’t move any part of my body,’ says Laura, from Tyldesley, Wigan.

‘All I could do was shake and nod my head.’

Having had tracheostomy and feeding tubes fitted, it was two weeks before Laura was even able to speak and she’s since had to learn how to do the most basic things all over again.

‘I had to learn to feed myself, brush my teeth, all the things you learn as a toddler, it’s like learning everything all over again.’

The muscles in Laura’s legs had deteriorated while she was in a coma, and it was only at the beginning of December that she managed to walk again – first making her way down the hospital corridor with a frame, and then holding the hand of her three-year-old son William.

Now, Laura is most looking forward to catching up on those lots early weeks with Hope, when she’s finally allowed home on Monday December 13.

John, 37, would regularly chat via FaceTime to Laura while she was in the coma, not knowing whether she could hear them or not.

He also didn’t name their baby – referring to her only as ‘baby girl’ until they could both agree on a name together – and has kept a scrapbook of things the children have done while their mum has been in hospital.

‘He’s been amazing, he really has,’ says Laura. ‘He’s been coming to see me every day with Hope and he’s been bringing William when he can and our children Lexi
and Josh, who stay with us a lot when they’re not at their mum’s.

‘They wanted to get that bond between me and Hope so she’s been lots, but with William we wanted to try to keep him in his routine as much as we could.

‘William first came to see me on his third birthday in October and I got really emotional as I’d not seen him since July.

‘I’ve missed his first day at nursery and I’ve missed Hope’s first weeks – her first bath and that kind of thing. John keeps telling me I’ve not missed much as all she does is sleep, poo and drink milk, but I can’t wait to get home.’

After her initial treatment at the Royal Bolton, Laura was sent to Wythenshawe Hospital, where she spent 35 days of her coma on an ECMO machine – the highest level of life support – and her family were told it was a last resort.

‘My family were obviously panicking,’ she says. ‘The doctors and nurses clearly thought it’s not looking good.

‘John has managed to keep everyone upbeat about it though. He was telling them “she’s not giving up and neither are we” and, !let’s keep positive, we’re not going to lose her, she’s going to be fine”.’

After five weeks in Wythenshawe, Laura returned to Bolton’s intensive care unit where she eventually came out of her coma.

From there she was later transferred to Trafford General, where she’s since been rehabilitating with intense physiotherapy and occupational therapy – with the goal of returning home for Christmas.

‘I have a timetable of classes with exercises that I do every day,’ she says. ‘I’m getting stronger every day and the nurse has said she hasn’t seen anyone make as much progress in such a short amount of time.

‘I think it’s helped to have that goal of getting home for Christmas and also to get home to my kids. I’ve missed them all so much.’

As well as thanking the staff at the hospitals she’s been treated at, Laura wants to thank her family, including parents Lynn and Bill, cousin Kirstie Atkinson and friend Emma Chatwood for all their support.

After her ordeal, she says she would recommend the jab to any pregnant women.

‘I’d say just get it,’ she says. ‘I wouldn’t wish what’s happened to me on anyone and it’s better to be safe than sorry.’ 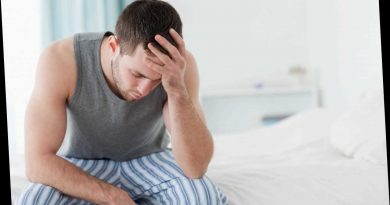 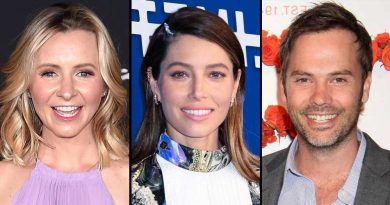