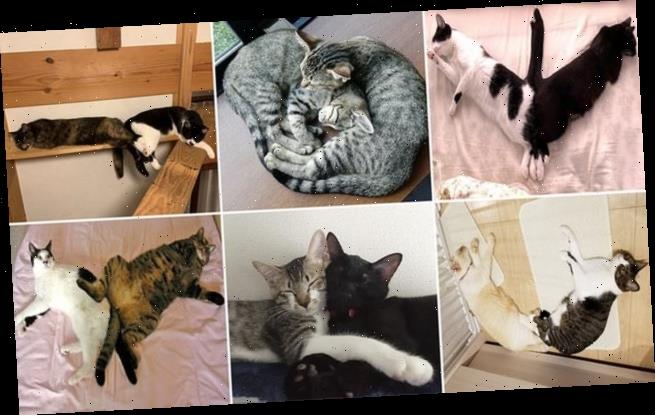 Cosying up for a cat nap! From dozing face-to-face to snuggling up on top of one another these hilarious pictures reveal the VERY strange position which furry friends sleep in

Most cat lovers know that their furry friends can be found catching some shut eye in the strangest of locations.

But now people from across Japan have been sharing snaps on Twitter with their felines cosying up for a cat nap in some slightly odd positions.

From a cheap cardboard box to hanging from a narrow shelf, these hilarious pictures capture the moment owners came upon their pets apparently fast asleep.

One pair were pictured lying symmetrically opposed with their tails aligned, while others slept on top of each other and a third duo pressed their faces against each other. 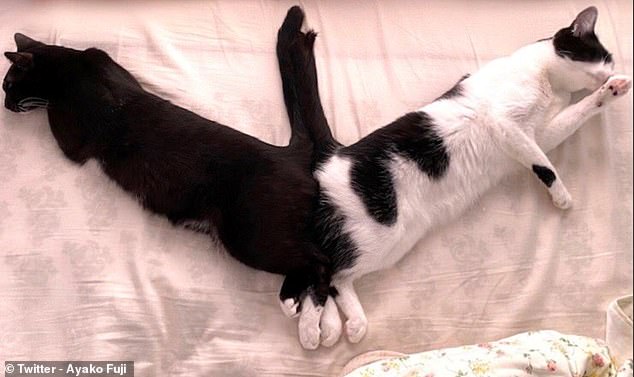 Social media users from across Japan have been sharing the hilariously bizarre way they’ve found their animals taking a cat nap (Pictured: This image of two cats lying symmetrically opposed was posted on Twitter by Japanese singer Ayako Fuji) 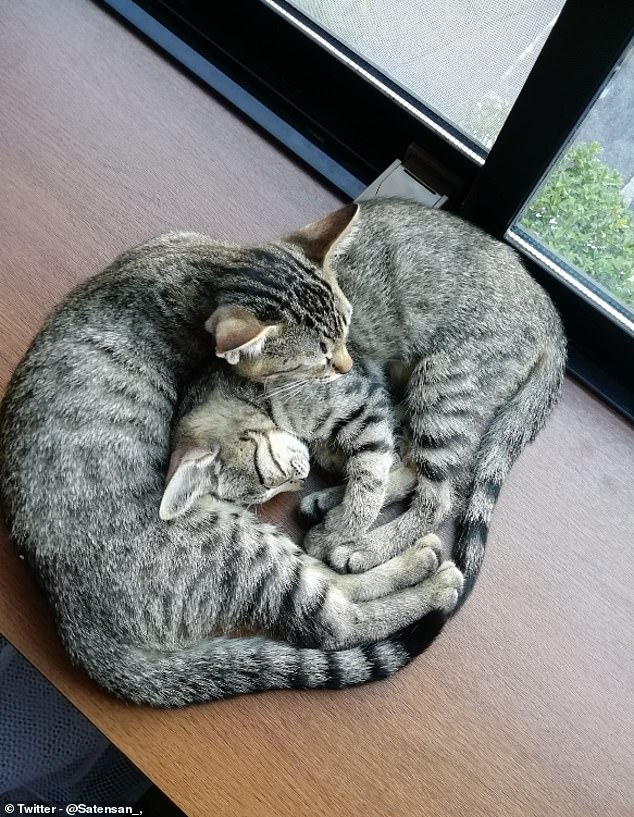 In response to her tweet, another user posted this image of her two cats, who she said are sisters. One appears to be sleeping soundly whilst curled against the belly of its sibling, who looks slightly more awake 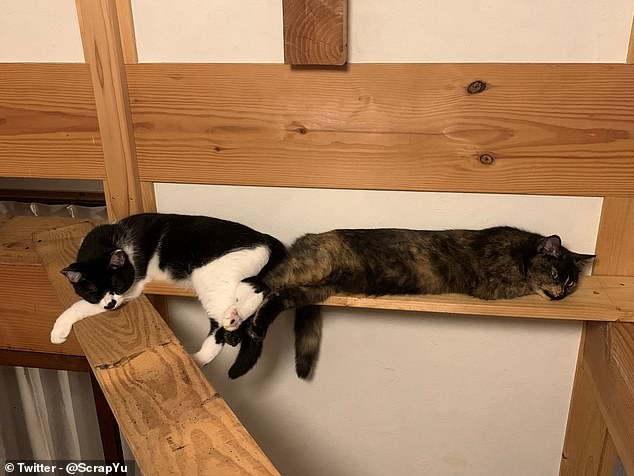 This pair of cats looked very awkward as they lay on a narrow shelf. The black and white moggy on the left looked particularly unsteady because it is lying half on the shelf while its head rested on another piece of wood 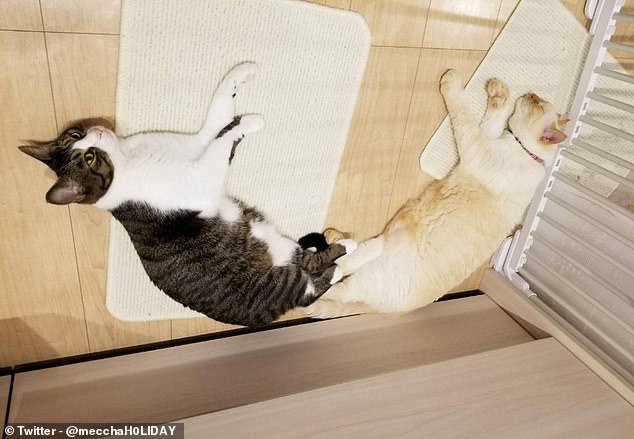 Responding to the thread, another person added how their cats often fall asleep with tehri feet resting gently on one another 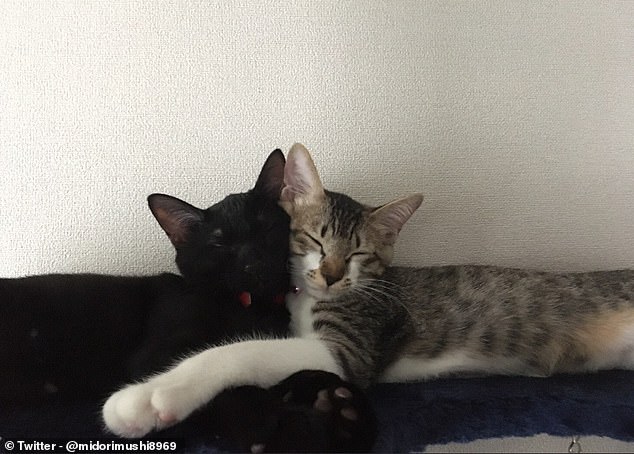 A nap buddy! Another person, whose location is unknown, shared a snap of their cats snuggled up with one another as they rested their heads and paws against each other while sleeping 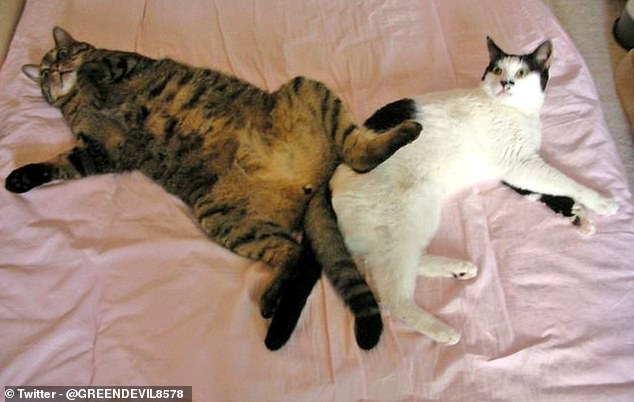 Caught in the act: These two cats, whose location is unknown, looked as though they had been startled during a comfortable nap. They were seen lying with their rear ends pressed against each other 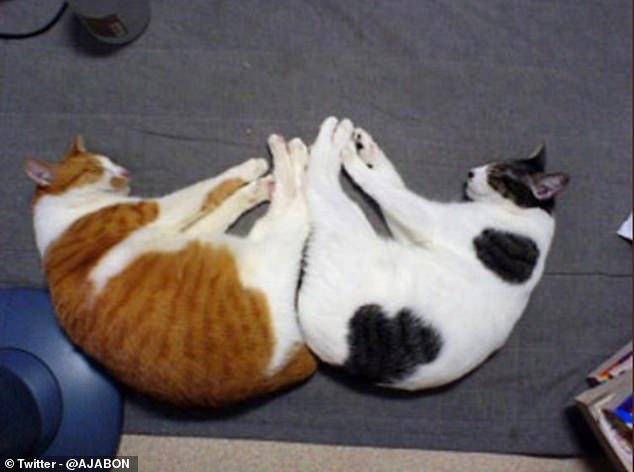 Feline comfortable: One owner managed to capture the moment their two cats snuggled up and pressed their feet together for a nap 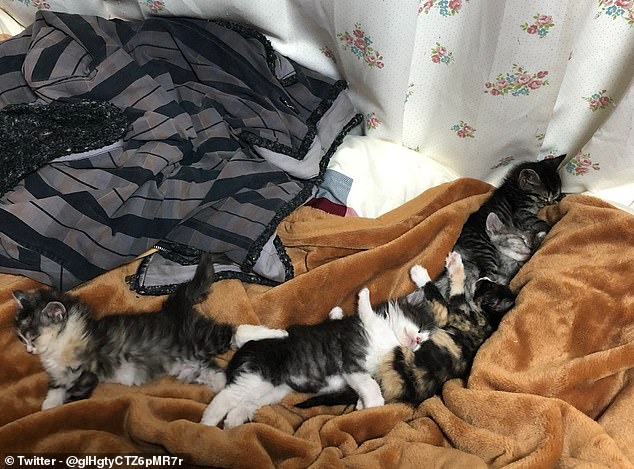 Too cute: In another snap, a collection of kittens can be seen crawling over one another as they settle down for a nap 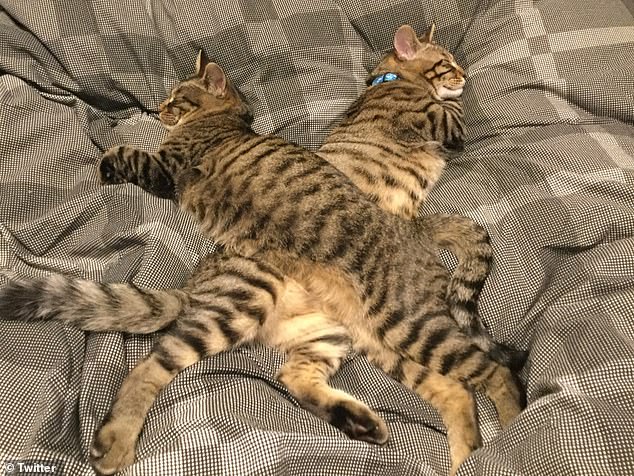 Wanna spoon? One person, whose location is unknown, managed to capture the moment one needy cat fell asleep on top of the other 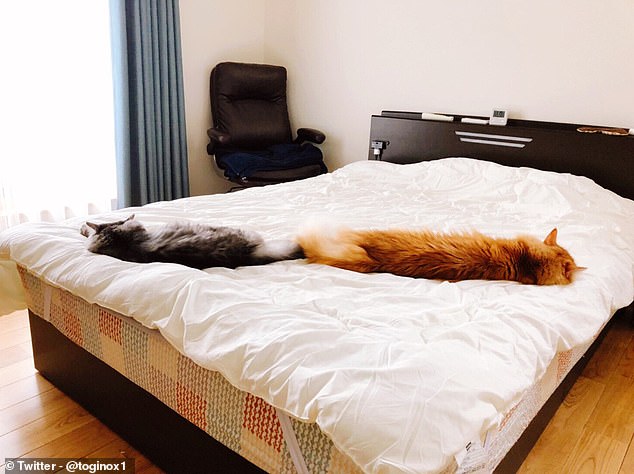 Making the most of the space: This pair – a ginger cat and its grey companion – made their owner, who is believed to come from the US, giggle after they took up the full double bed to themselves 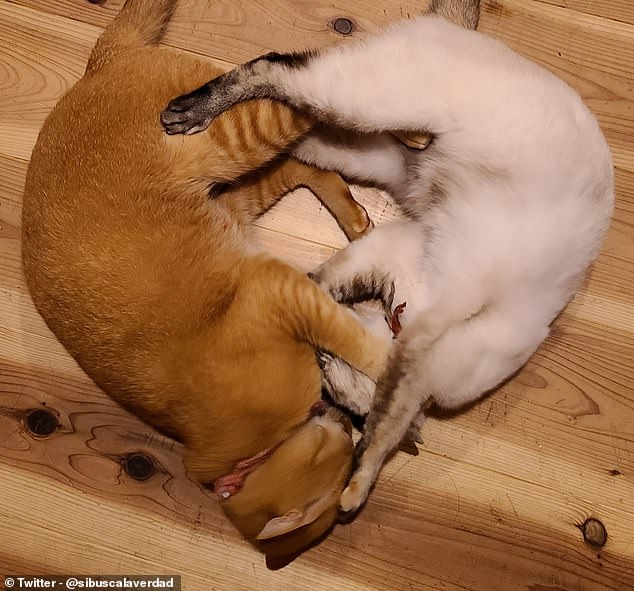 Face to face: This doting pair were enjoying one another’s company so much that they slept with their paws intertwined and faces pressed against each other 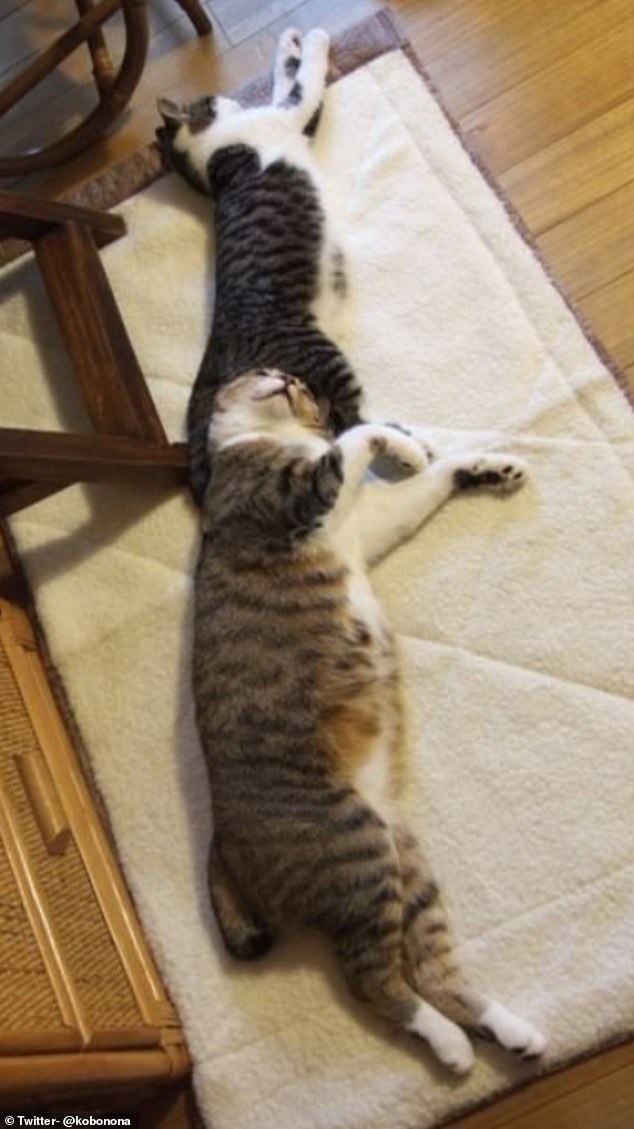 A comfy spot! One ridiculous tabby cat made their owner chuckle by sleeping with its head pressed against the rear end of its companion 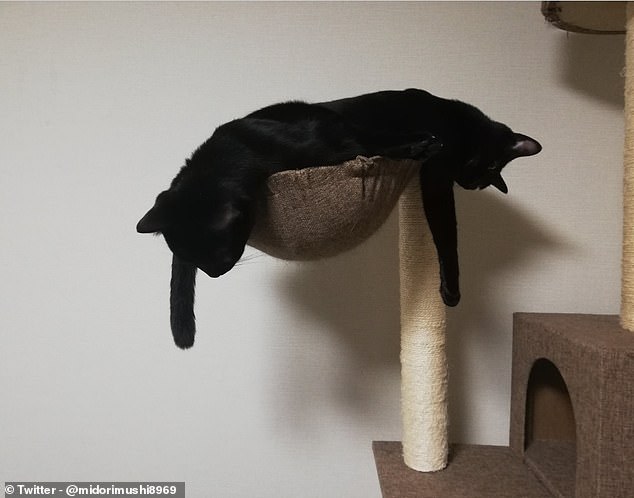 Sharing is caring: These two black cats snuggled up to squeeze into a small basket and catch 40 winks 8x 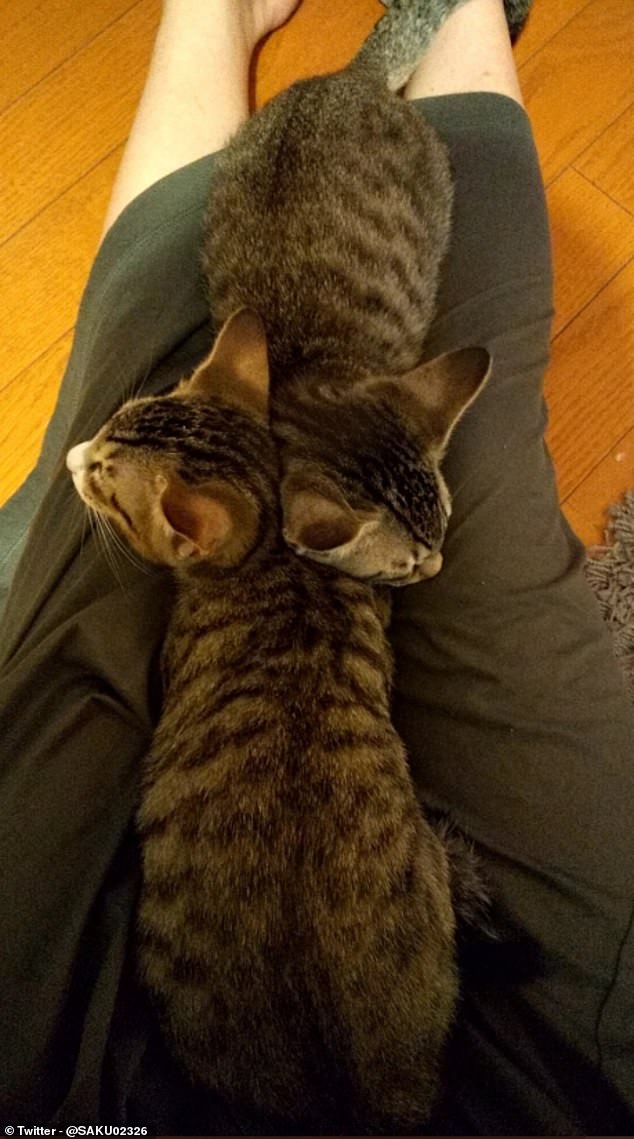 The perfect spot for a snooze! This pair, whose location is unknown, were both determined to snuggle up with their owner for a nap 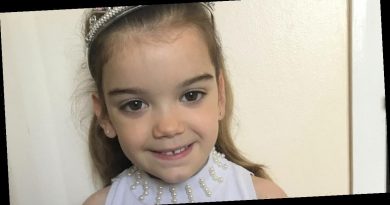 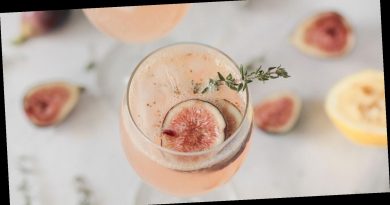 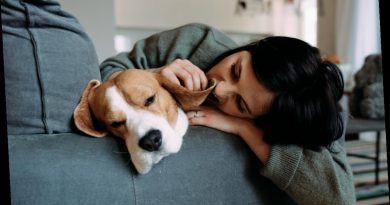