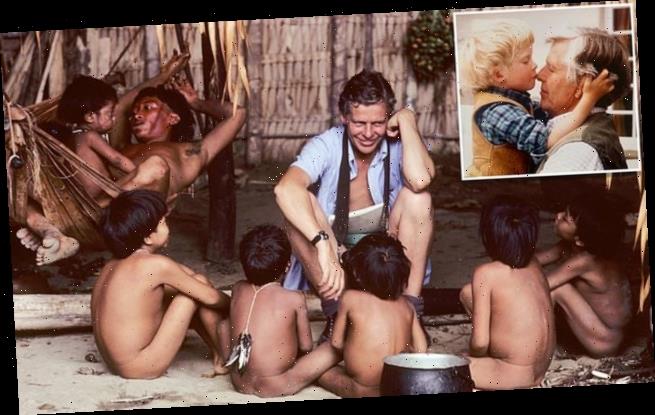 My hero explorer dad was felled by the plague he predicted: Son of 83-year-old Robin Hanbury-Tenison on how his father was one of the first victims of coronavirus… but is battling on to return to the world of nature he loves

There comes a point in every child’s life when they realise their parents aren’t invincible. That moment, for me, came later than for most: my father, the explorer Robin Hanbury-Tenison, had seemed indestructible even into his 80s.

But that changed six weeks ago when, desperately ill with coronavirus, he was rushed to hospital by medics in hazmat suits. We haven’t seen him since.

While we were shocked at the suddenness and the terrible danger he found himself in, I know that my father was not surprised, for a global pestilence is what he had predicted in his new and alarmingly prescient book.

He had believed such a catastrophe was imminent, although he had never imagined that he would be among its first victims. Even as Taming The Four Horsemen: ­Radical Solutions To Defeat Pandemics, War, Famine And The Death Of The Planet was published in February, Covid-19 had begun to silently work its way through Europe. 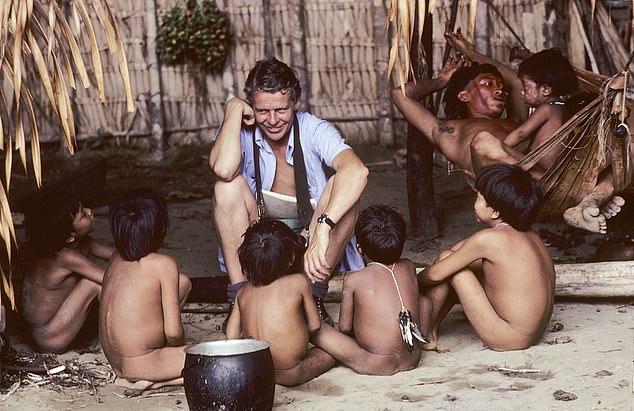 MERLIN HANBURY-TENISON: While we were shocked at the suddenness and the terrible danger he found himself in, I know that my father Robin Hanbury-Tenison (pictured, in the Amazon, 1981) was not surprised, for a global pestilence is what he had predicted

His thesis is clear: we humans have consistently and wilfully neglected the world we rely upon to sustain us. Deforestation, intensive agriculture and rampant consumerism have destroyed the natural environment and left us vulnerable to contagions and risks we as yet barely understand.

History teaches us that, without fertile lands, there is hunger and war, epidemics and climate change. This pattern has destroyed civilisations for centuries, he says, and now we face the same fate.

As a veteran explorer and conservationist, who has seen the impact of viruses on remote tribes, his anger is deep-seated. Now 83, my father has led more than 30 expeditions around the globe, was one of the founders of the tribal peoples’ charity, Survival International, and has written 27 books about his travels and the indigenous people he has lived with.

The Four Horsemen – with a foreword written by the Prime Minister’s father Stanley Johnson – was inspired by a trip to Central America to visit old Mayan temples and pyramids.

This once huge civilisation of around two million people collapsed very quickly and has almost entirely disappeared, leaving just a few relics to fuel the imagination. To my father, the parallels were clear. Pestilence, famine, war and death – the four horsemen of the apocalypse – had wiped out the Mayans.

And epidemiologists all agree: we, too, were long overdue a pandemic. The risk today is the speed of its spread as the rate of global travel transports it across continents in hours.

In the book, he writes: ‘Pandemics are extremely difficult to predict and difficult to prepare for. They all start with a random event: a pathogen crossing to humans from another species. The real danger is a brand new virus, probably a strain of influenza.’

Sound familiar? Today, he lies in hospital, recuperating after a month under sedation in intensive care, a victim of the modern plague he had warned society it was facing.

But there is hope – not just for his own health, but for the world as we know it.

Unlike ancient civilisations, he reasons, we have the technology to overcome this and other threats. Scientists are investigating the influence of the ecosystem of bacteria and organisms which live in our digestive system (the gut biome), which may have a role in our ability to fight disease, our physical health and even our moods. Our bodies are ‘literally riddled with life’, he says.

Harnessing this power could be a more sustainable way to combat pandemics, rather than creating new chemicals and drugs – particularly when antibiotic resistance is such a growing problem.

And, crucially, it will be alongside nature that I hope my father makes his recuperation when he returns to our family farm, Cabilla, in rural Cornwall, which he bought in early 1960, aged 23.

He turned his hand to everything from dairy, sheep and cattle to angora goat breeding, red deer blood stock and wild boar luxury meat farming. Every tree was planted by him and he knows every wildflower, bush and bird.

He has always been a man of nature, whether sleeping in the Kalahari Desert with bushmen or slinging his hammock in the Amazon rainforest and listening to jaguars prowling beneath him throughout the night.

Several years ago, I took the farm over after I left the Army. My wife Lizzie and I live in the old farmhouse and my parents live in a barn conversion across the yard. My parents returned from a skiing trip in France in early March so we maintained a strict two-metre distance between us.

Within a couple of days my father developed a dry cough. Unusually, he felt weak just walking in the garden and, by the evening, he had a temperature and was struggling to breathe.

So we called an ambulance and he was taken away by paramedics, unable to hug any of us goodbye. Within 24 hours of his arrival at Derriford Hospital in Plymouth he was sedated and on a ventilator with confirmed coronavirus.

He was kept sedated for almost a month and we were told that, at his age and in his condition, he had a 20 per cent chance of survival. We swung from hopeless optimism and faith in his virility and determination, to dejected misery. 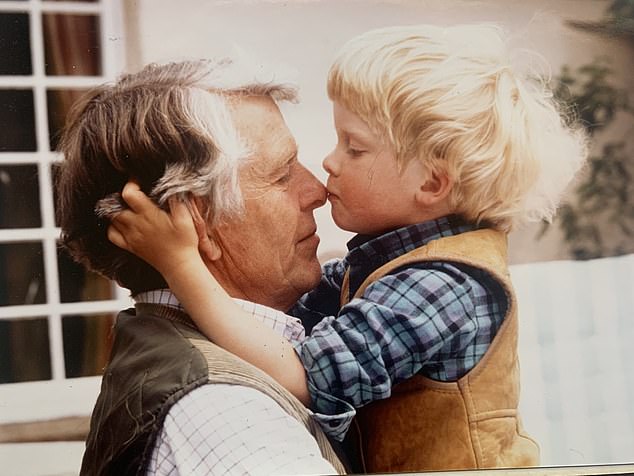 MERLIN HANBURY-TENISON: There comes a point in every child’s life when they realise their parents aren’t invincible. That moment, for me, came later than for most: six weeks ago (pictured, Robin and Merlin Hanbury-Tenison at Cabilla, 1989)

His lungs were failing; then his kidneys stopped working and he was put on dialysis. This lowered his chances even further. Without the constant kindness and calm care he – and we – received from the nurses on the intensive care unit, we would have given up hope.

When they began to wake him up, he suffered terribly from a severe bout of sedation delirium. Finding yourself surrounded by strangers in full facial PPE with multiple tubes running in and out of your body would be terrifying at the best of times.

Submerged in a fog of tranquillisers, antibiotics and other drugs it is panic-inducing and disorientating. Several times he needed to be re-sedated and at no point did he seem lucid or aware of where he was. The first time we were able to speak to him properly was a moment I will never forget. The nurses had wheeled his bed out into a ‘secret garden’ they have at Derriford for ICU patients.

He had the sun on his face and greenery in the background. He didn’t make a great deal of sense. However, before lapsing into confusion, he looked up at the sky and said how much he’d missed the blue, and complimented the staff on the few flowers that were growing.

Even this minimal exposure to a natural environment seemed to trigger the turning point in his recovery. It would be a long road but my father was slowly coming back to us. I have long believed in the healing power of the natural world and have spent many hours immersed in peaceful woodland while battling my own demons from three tours of Afghanistan.

A Japanese study has showed that forest environments promote lower concentrations of the stress hormone cortisol, lower pulse rate and lower blood pressure. With that in mind, we had already planned to open our farm as a nature retreat, where people can come to escape the stress and pressure of their busy lives.

Our first guests were due this month; the opening now delayed because of the Covid crisis. But it’s fitting that it will be my father who will now be the first to recuperate there. And I know that, when we get the old explorer back, his condition will improve rapidly.

The first step will be to gently return him to the woods he knows so well to drink in the air and gaze upon his old friends, the oaks, that dapple the light that reaches the ground and which provide homes and food for the bursting ecosystem that they support.

Having already started rewilding the farm – returning species such as beavers, water voles, pine martens and, eventually, red squirrels – that have been lost over the past few centuries, there’s a wonderful sense of poetry in the idea that we’ll also be rewilding my father. Returning him to nature after his medical journey.

Pulling the fences out on the land will be like pulling all those drips out of his arm. My father left intensive care a couple of weeks ago and is now in a rehabilitation ward while they strengthen him before, hopefully, returning him home.

He is not out of the woods yet but all of the nurses and doctors have been amazed by his tenacity and refusal to succumb, against all the odds.

It has probably been his most extraordinary adventure to date. In all his years of being my hero, he hasn’t let me down yet. In fact, he’s already said he has two plans for his release: to write a book about his experiences, and to perform a series of challenges to raise money so more ICUs can build gardens.

Sunlight, fresh air and some greenery can perform wonders. In these uncertain times, it’s a lesson we would all do well to remember. 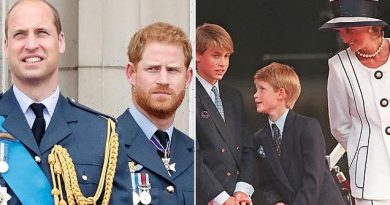 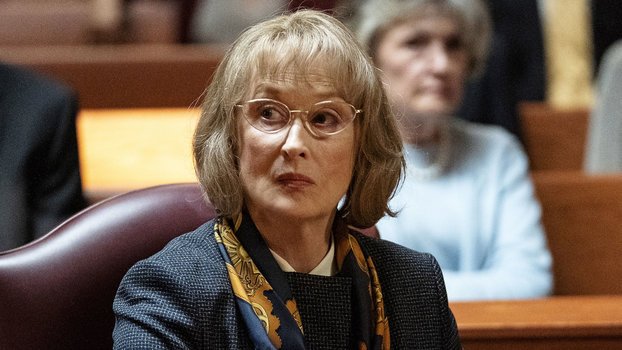 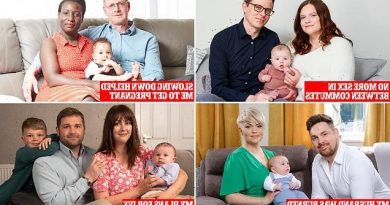 Slowing down our lives sped up our baby dreams