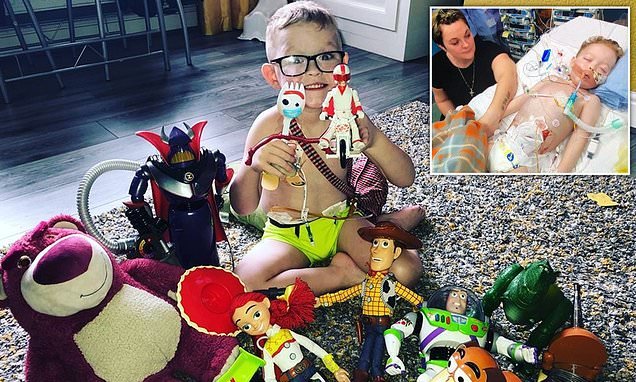 Mother whose son, 4, was born with his intestine outside his body and is battling a rare stomach disorder is raising £20K for private treatment after he was denied help by the NHS

A mother whose four-year-old was denied funding by the NHS to help him battle a rare stomach disorder has been forced to turn to expensive private treatment to save her son’s life.

Patrick Askham, from Leeds, was born prematurely with Gastroschisis, which means that part of his intestine was outside of his body.

The complications from the disorder mean that the youngster has been in and out of hospital since the day he was born and is fed through a tube.

He now needs a bowel, liver and possibly a stomach transplant too.

His mother Michelle Askham, 33, has opened up to FEMAIL about the struggles the family has faced.

‘Knowing one day you will bury your child before you is every single parent’s worst nightmare. For us we live this reality,’ she said. 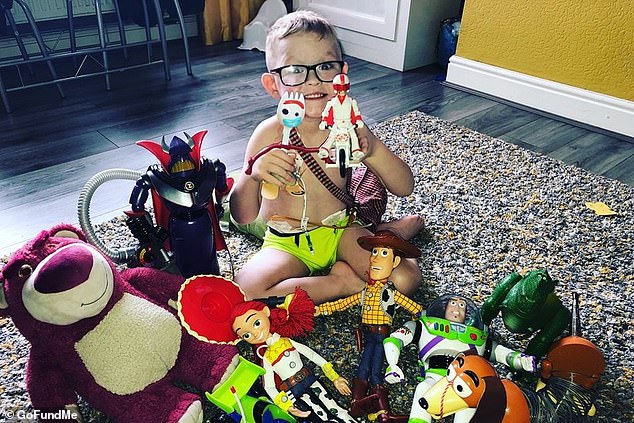 Michelle Askham said that, despite everything he’s been through, Patrick always has a smile on his face 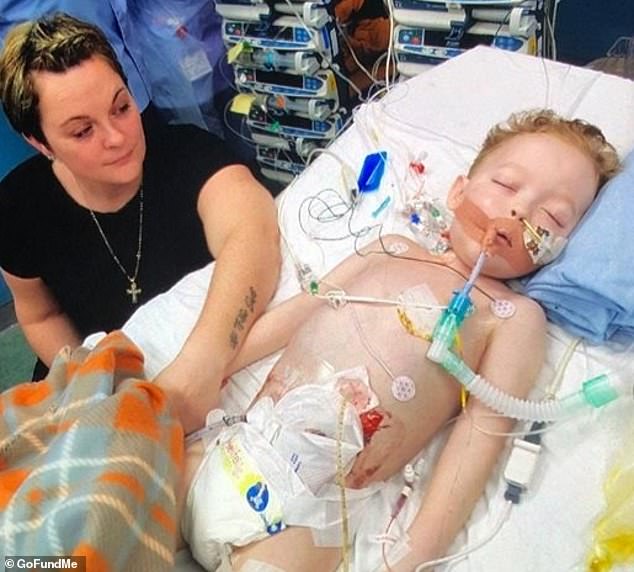 Patrick, four, from Leeds, was born prematurely with Gastroschisis – meaning part of his bowel was outside of his body. He is pictured here with his mother Michelle

She described Patrick’s illness as a ‘rollercoaster’ journey and added that ‘even though he’s been used as a pin cushion, he still manages the most beautiful cheesy smile’.

‘Our most frightening moments are knowing every day can be our last with him,’ Michelle explained, adding: ‘But we know we will have done every single thing we can to possibly make his life the best!’

Patrick had a bowel transplant in December 2018, but after just nine days his body started to reject it and he was given drugs to stop this.

But the result was devastating. The medication he was given to stop his body rejecting the new organ resulted in him developing a type of cancer in his lymph nodes, according to his mother.

That left the youngster, ‘who always has a smile on his face’, back at square one, and he now needs a bowel, liver and possibly a stomach transplant too. 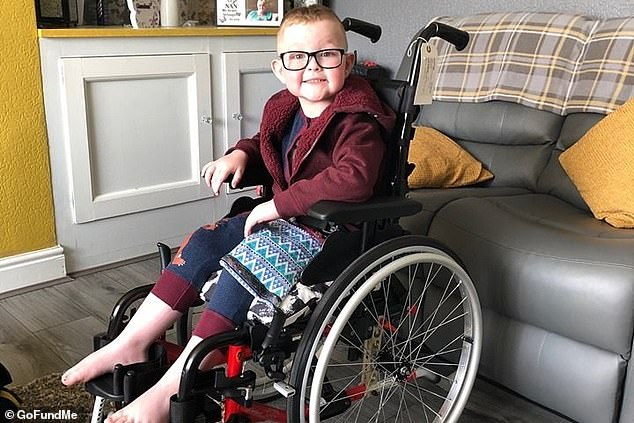 Patrick already had a bowel transplant in December 2018 but it had to be removed when his body rejected it. That left the youngster ‘who always has a smile on his face’ back at square one

To be placed on the register for new organs, Patrick needs Cytotoxic T-Cell Therapy, which isn’t available on the NHS.

The costly preventative treatment sees the creation of a type of white blood cell that attacks and destroys virtually any cell that is infected with a virus.

The hope is that it will give any future transplants a better chance of success.

However it also puts him at risk of developing lymphoid disorders. As a result an NHS England panel refused to consider the family’s pleas for independent funding, meaning Michelle has s nowhere else to turn other than private treatment.

The family now have to raise funds for the cells, an expert to administer them and the resulting outpatient appointments.

The whole process could cost the family upwards of £20,000, leading a family friend to create a GoFundMe page in a bid to raise the much-needed funds that could save Patrick’s life.

‘As much as we’d like to bash the NHS, we still have to remember without them we wouldn’t have got this far,’ Michelle said. 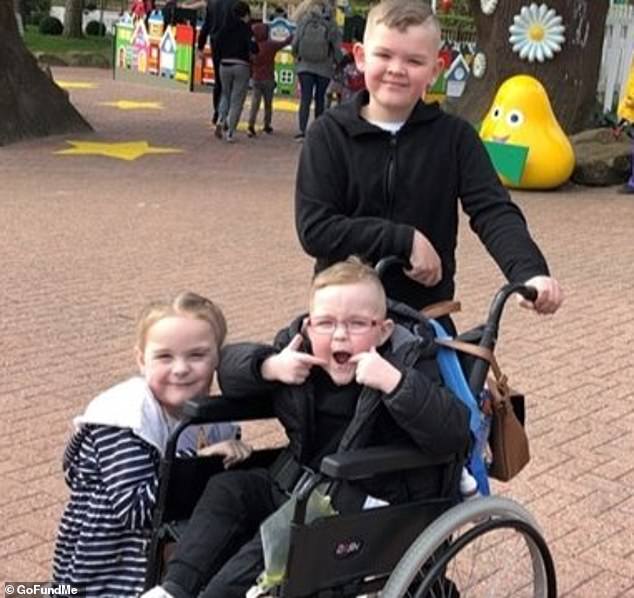 Patrick (centre) with his older brother Carrick, nine, and his sister Molly, who is six-years-old 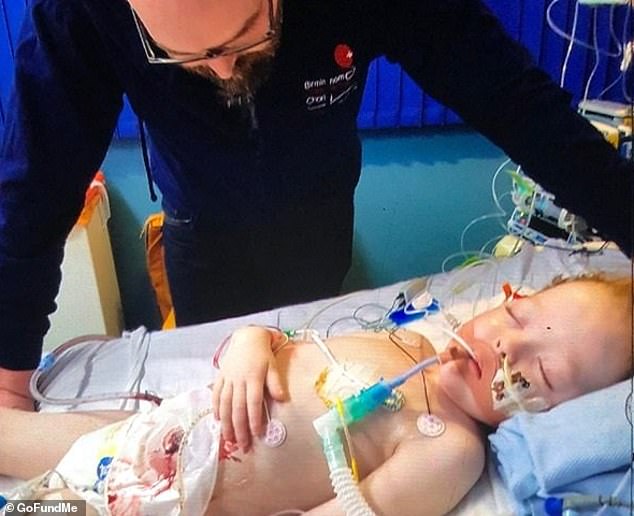 The youngster pictured in hospital with his father. Michelle said she just wants a ‘happy little person’

The money that’s now needed would pay for four rounds of therapy which would take Patrick 100 miles from his home to the clinic in Birmingham and support his mother with travel and accommodation costs.

Gastroschisis is a birth defect of the abdominal (belly) wall.

A baby with the condition has a small hole in the front of the abdomen, just to the side of the umbilical cord, through which some of the bowel (intestine) is protruding. This bowel is easily visible on the ultrasound scan.

In some babies with Gastroschisis there is a gap in the bowel called an atresia. This may be noticed at the first operation or not be suspected until around four to six weeks of age if the baby is not able to tolerate milk. X-rays are carried out to confirm whether an atresia is present. If an atresia is confirmed, the baby would need a further operation to join the bowel together.

This is a rare problem, which occurs in around one in every 3000 births in the UK, and there is currently no known cause.

‘We’ve lost count how many times Patrick has been to theatre, had stomas, caecostomys, broviac lines, bowel perforations- he’s truly been through it all,’ said Michelle, who is Patrick’s full time carer.

She added that her youngest is even fed via a tube to his heart and says it’s ‘not fair’ that he can’t eat.

‘It’s difficult to have to make so many life-altering decisions for your child that are never simple. It’s hard. The decisions we have to make as parents impact on us all at home,’ Michelle told Femail, referring to her two other children – Carrick, nine, and Molly, six – and her husband Peter, 38, a press operator.

‘You’re on the edge of him getting a line infection that could lead to life-threatening sepsis, something he had only three weeks ago.

‘It’s a mental checklist every minute of every day to make sure he’s safe,’ she added.

Michelle described how she felt ‘helpless’ when she had to sit listening to her son ‘moaning in his sleep’ and couldn’t help but wonder ‘what the hell has this little boy done to deserve such s*** thrown at him?’. 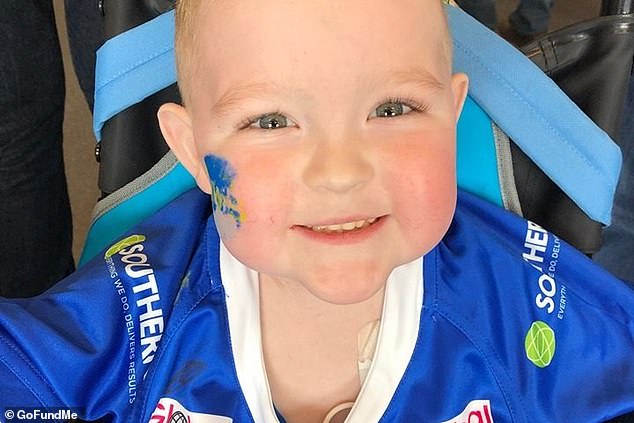 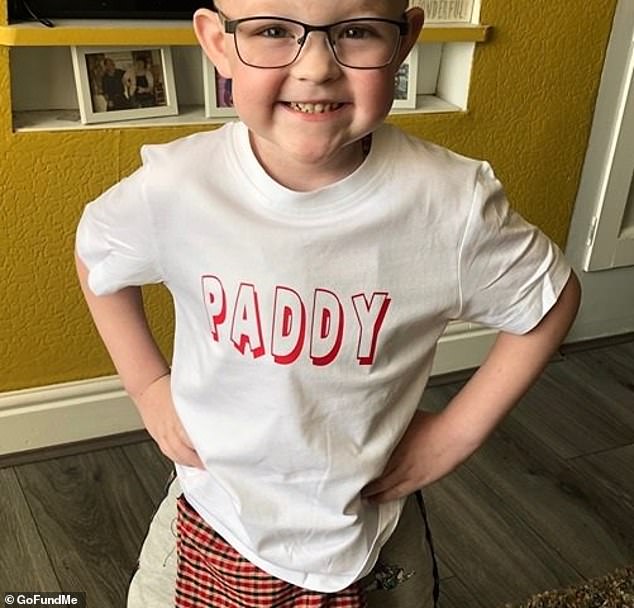 To be placed on the register for new organs, Patrick – known as Paddy – needs the preventative treatment which attacks and destroys virtually any cell that is infected with a virus

Speaking about the potential future treatment, Michelle said: ‘It’s so daunting when he’s only just getting over what he’s just been through.

‘The therapy will help Patrick massively reduce the complications which nearly cost him his life following his first transplant, and has seen positive results in others.’

Speaking about Patrick’s future, the loving mother said: ‘Apart from the obvious of him being here, we just want him to be happy. We want him to grow. Make mistakes. It’s cliche but that’s all we want. A happy little person! That can live relatively pain free.’

For more information on Patrick’s journey visit his Facebook page and to donate, go to his GoFundMe page. 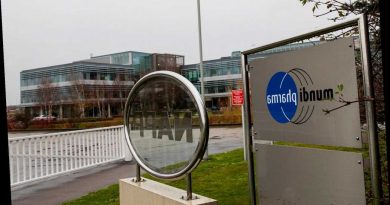 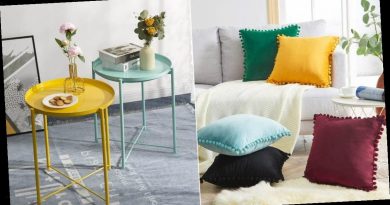 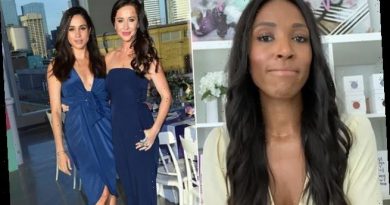