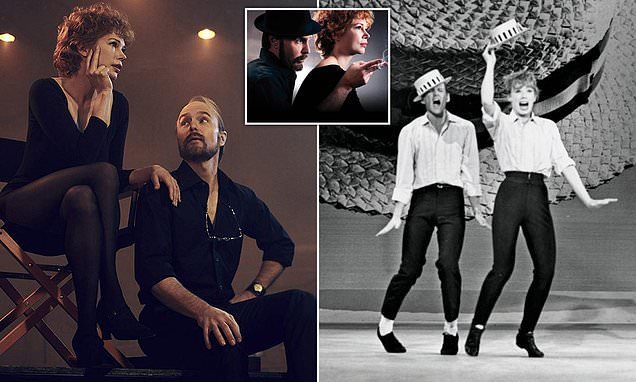 Their lives really were a Cabaret: Actress Michelle Williams on the hedonism that tore dance legends Gwen Verdon and Bob Fosse apart

Burton and Taylor had nothing on them. Bob Fosse was the lord of the dance scene in 50s and 60s New York, the daringly innovative choreographer and director of films like Cabaret, which made a star of Liza Minnelli and won eight Oscars, Sweet Charity with Shirley MacLaine, and shows like Broadway smash hit Chicago.

He was the master of the jauntily tipped bowler hat and the sideways shuffle, and inventor of the famous ‘jazz hands’.

Gwen Verdon was his wife, muse and dance partner, the most celebrated dancer on Broadway, with flaming red hair and a wicked glint in her eye.

The couple were married for 11 passionate, tumultuous years until his compulsively womanising ways – along with the drink-and-drug-fuelled lifestyle that would eventually kill him at the age of just 60 – tore their marriage apart. 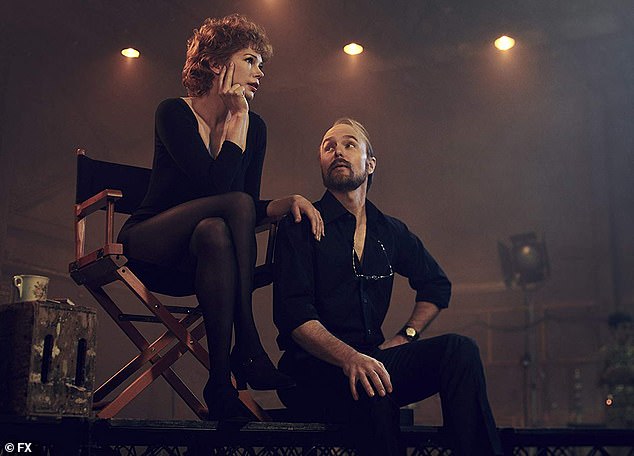 However they remained friends to the end, and when he did die of a massive heart attack suffered on his way to a stage performance of Sweet Charity at the National Theatre in Washington DC, it was to be in her arms.

In a dizzying combination of straight dramatisation and flashbacks, it reveals their challenges and triumphs, their marital bust-ups and reconciliations, and most importantly of all, the spark that ignited their love and provided the world with a dance partnership the like of which we shall never see again.

Born in 1927, Bob Fosse, the son of a Chicago vaudeville performer turned travelling salesman, began dancing professionally when he was just 13 years old. 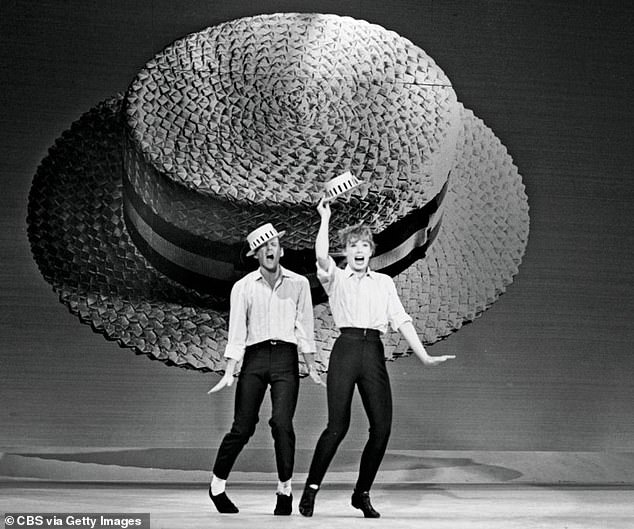 Gwen Verdon and Bob Fosse were married for 11 passionate, tumultuous years (Pictured on the Garry Moore Show in 1962) 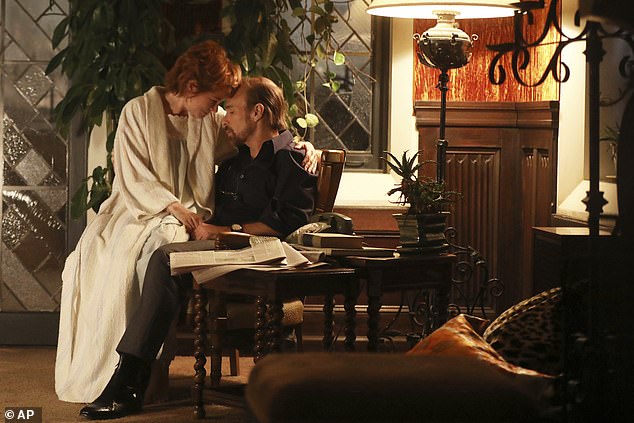 Bob’s drink-and-drug-fuelled lifestyle, which would eventually kill him at the age of just 60, destroyed his marriage (Pictured: Michelle and Sam in Fosse/Verdon)

After school he joined the Navy at the end of the Second World War, and had a two-year stint dancing in an entertainment unit.

When the war was over he moved to New York where his fresh and innovative style quickly gained him acclaim. It led to a career that would produce some of musical theatre’s most legendary works.

He choreographed and directed Gwen in the musical Sweet Charity in 1966, which was nominated for nine Tony Awards and later became the 1969 feature film starring Shirley MacLaine. 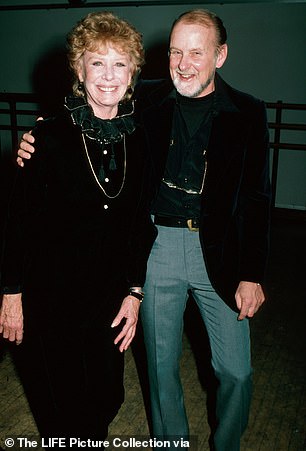 But it was his 1972 film Cabaret that made a household name of Liza Minnelli and won eight Oscars – including Best Actress for Liza – that turned Bob into the darling of Hollywood.

As if that were not enough, his 1975 Broadway production of Chicago is one of the most revived productions around the world, and Bob remains the only person to date ever to win Oscar, Tony and Emmy awards in the same year – 1973 – for, respectively, Cabaret, the musical Pippin, and the TV documentary Liza With A ‘Z’.

The catalyst for this phenomenal success was Gwen. Born in LA in 1925, she suffered from rickets as a child and spent her early years in leg braces and orthopaedic boots.

When her mother, a dance teacher, took her to dance lessons to strengthen her legs Gwen discovered her talent. She moved to New York in her twenties and met Bob when, as a chorus girl on Broadway, she was cast as the vampish Lola in his 1955 musical Damn Yankees.

The dance they did together in that show, Who’s Got The Pain, which is reproduced affectionately in the mini-series, is now famous as the only filmed example of the two dancing together.

Their smooth moves are rivalled only by the crackling sexual electricity between them, revealing unmistakably two people who are falling in love.

Michelle Williams, with her round face, radiant grin and lithe dancer’s body, would seem born to play Gwen, who died in 2000 aged 75. 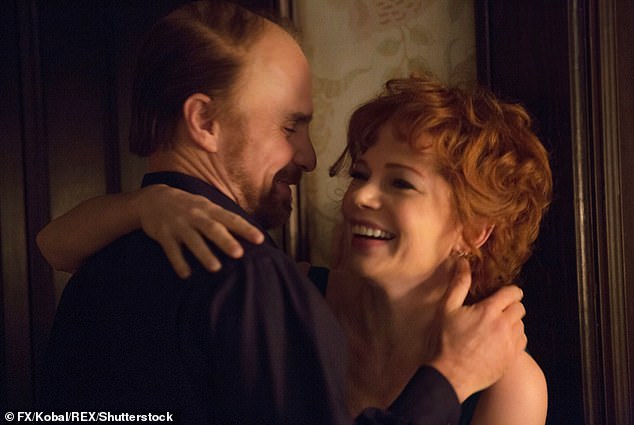 He choreographed and directed Gwen in the musical Sweet Charity in 1966, which was nominated for nine Tony Awards (Pictured: Sam and Michelle in Fosse/Verdon)

A former child actor, Michelle has a background in musical theatre but she admits that until she took on the role she had known relatively little about her character.

‘I was unfamiliar with her legacy, but there’s a ton of material,’ says Michelle.

‘Unfortunately there’s no footage of her longer performances on Broadway because they’re not archived. But there’s a lot on YouTube, television appearances and smaller clips, and some movies she was in.

‘And her daughter Nicole has been great: she has an amazing memory, so she was able to recall the littlest things like, “This was the colour of my mom’s lipstick”, or “My mom would break up her sentences like this, and hold her breath like that.” Really small details that she’d give to me as a help.’

Michelle says her most important task in portraying Gwen was to capture her larger-than-life personality.

‘I had to become a bigger person in order to play her. She was very theatrical. She was a great storyteller and she had this kind of energy that could fill a room and keep things moving along. It’s very Broadway, that energy.

‘Theatre people can do eight shows a week, you really have to have an extraordinary spirit to be able to sustain that. That’s what Nicole would say about her own mother, that she was just ‘extra’ in every sense. She made ordinary life seem like a great drama.’

It was a sense of the dramatic that infused Gwen’s passion for her talented husband.

‘Gwen once said about Bob that, “I would set my hair on fire for him,”‘ says Michelle. ‘She said, “I would rather please Bob Fosse than please an entire audience.” That was how important he was to her.’ 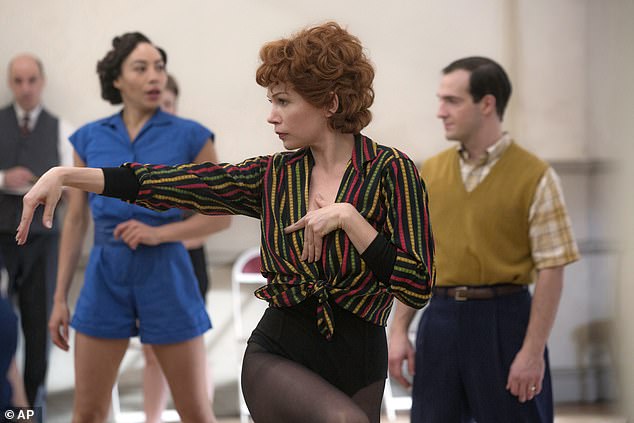 Michelle Williams, with her round face, radiant grin and lithe dancer’s body, would seem born to play Gwen, who died in 2000 aged 75

That love, says Michelle, made both of them better professionally as well as personally.

‘They both fed off each other. Gwen was an extraordinary dancer – if she could think of a step she could dance it – but she always said she was not a choreographer, so she needed somebody to tell her what to do.

‘Meanwhile, Bob needed somebody who could translate his brain into action, and so they had this perfect synergy, which led to an artistic connection that was of the highest possible order.’

The pair married in 1960, produced daughter Nicole three years later, and for a while lived blissfully in New York, acting and dancing at work and enjoying riotous dinner parties with their friends in the New York theatrical crowd such as Neil Simon and three-time Oscar-winning writer Paddy Chayefsky.

Unfortunately, all too soon other aspects of their life took over. For years, Bob had struggled with his health. He suffered from asthma, and in 1961 had an epileptic seizure while rehearsing a show on stage.

In 1974 he underwent open heart surgery. Fatally for their marriage, he was also an addict – of drugs, alcohol and other women.

‘I think if Bob and Gwen could have just stayed in the dance studio, they would have stayed married forever,’ says Michelle.

‘They tried to take the good things they had and build a life and a family with it, but what they came up against was reality and addiction. Bob was addicted to sex, drugs and alcohol.

‘It was all trying to fill a hole in himself, but the hole wouldn’t be filled, it just kept expanding. When we first see Gwen in the programme we see her as a dancer, but as the show goes on we see that she’s a woman too, and she wanted a different life for herself.

‘She no longer wanted to live with that kind of infidelity, and she fought very hard to carve out a different sort of life for herself.’

It didn’t help that in the 1960s, the world for a woman was a very different place from the one it is today. 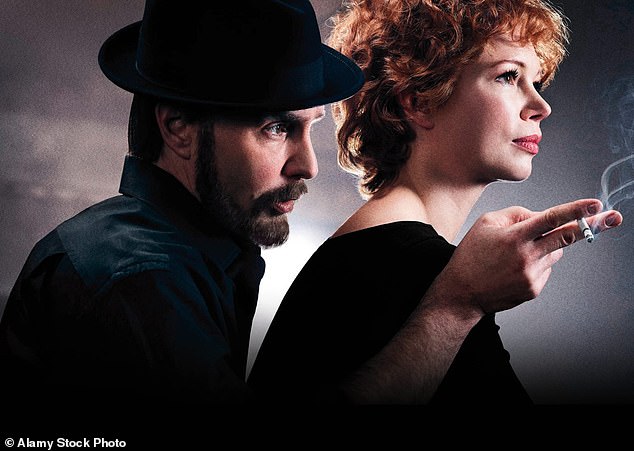 ‘I was unfamiliar with her legacy, but there’s a ton of material,’ said Michelle

‘What’s interesting about making a period piece is that it isn’t just about hairstyles and heel height, it’s about the gender dynamic and the politics of the time too. When my own mother was growing up, her choices in life were to be a housewife or a schoolteacher.

‘Gwen did break free in many ways – she left the marriage, had a long-term relationship with a much younger man [actor Jerry Lanning, who her lover Ron in the series is thought to be based on] and made her own way in the world.

‘But I think it’s interesting that, for all her skill at dancing, she never became a choreographer. What we have to wonder now is, did she never envision herself as a choreographer because there were no examples of other female choreographers she could look to?

‘Was it her true feeling about herself, or was it a limitation imposed on her by society? It’s really hard to say.’

One of the many remarkable things about the story of Bob and Gwen was the real friendship they kept up long after their marriage had fallen apart. 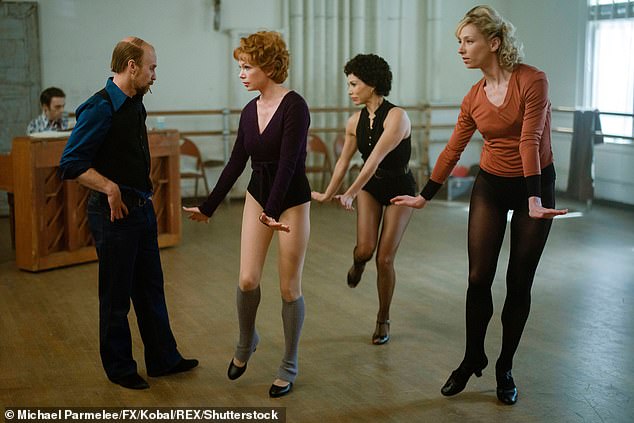 The pair kept up a remarkable, real friendship long after their marriage had fallen apart

And not only did Gwen remain friends with Bob, she also stayed friendly with his subsequent girlfriends, including actress Ann Reinking, who had replaced Gwen in the Broadway production of Chicago, and with whom she and daughter Nicole reportedly consoled each other at Bob’s funeral. Nobody, it seemed, could stay angry with Bob for long.

‘The thing about Bob is that he was so charming,’ says Michelle. ‘By all accounts he behaved in such a way that made people want to take care of him – he was like a wounded little boy, and that engendered a maternal and nurturing aspect to all his relationships with women.

‘Whatever went on with Gwen and Bob, they had an indestructible bond, and called each other their best friend until the day he died. In the TV show, you’ll see a lot about Bob’s past and understand how he got to be the way he was, and – without giving too much away – it’s very interesting.’

She reveals that her daughter Matilda, now 13, from her relationship with the late Heath Ledger, has been thoroughly enjoying being around the set.

‘She loves musical theatre too, so she’s been very excited to be around all of us. She often came to the set with me – she’s always involved in everything I do. She’s proud of me, which is very nice.’

Fosse/Verdon begins on BBC2 next month 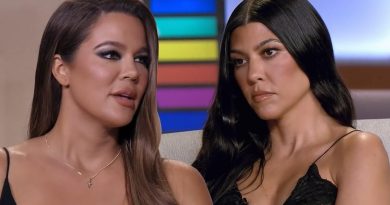 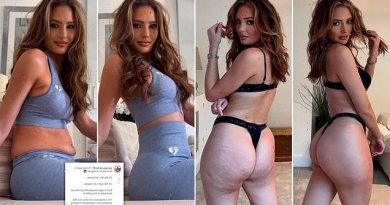 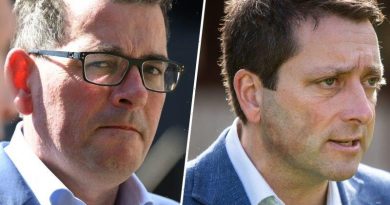