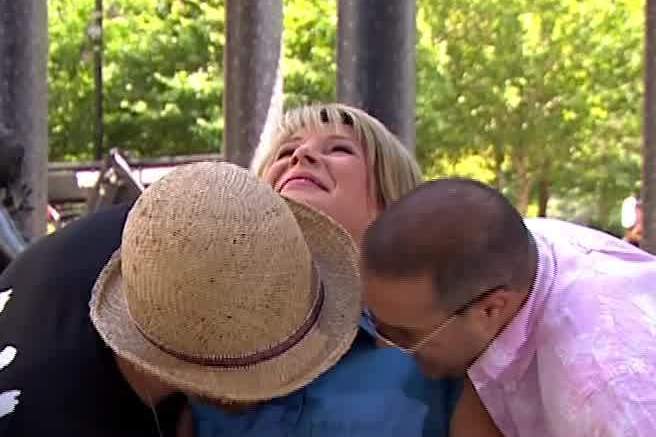 KEITH Lemon and Paddy McGuinness surprised Eamonn and Ruth Langsford earlier today when they gatecrashed This Morning live on air.

Eamonn and Ruth, both 59, were presenting outside London’s Television Centre due to the glorious weather when the Celebrity Juice stars unexpectedly dropped by as they were filming in the same studios. 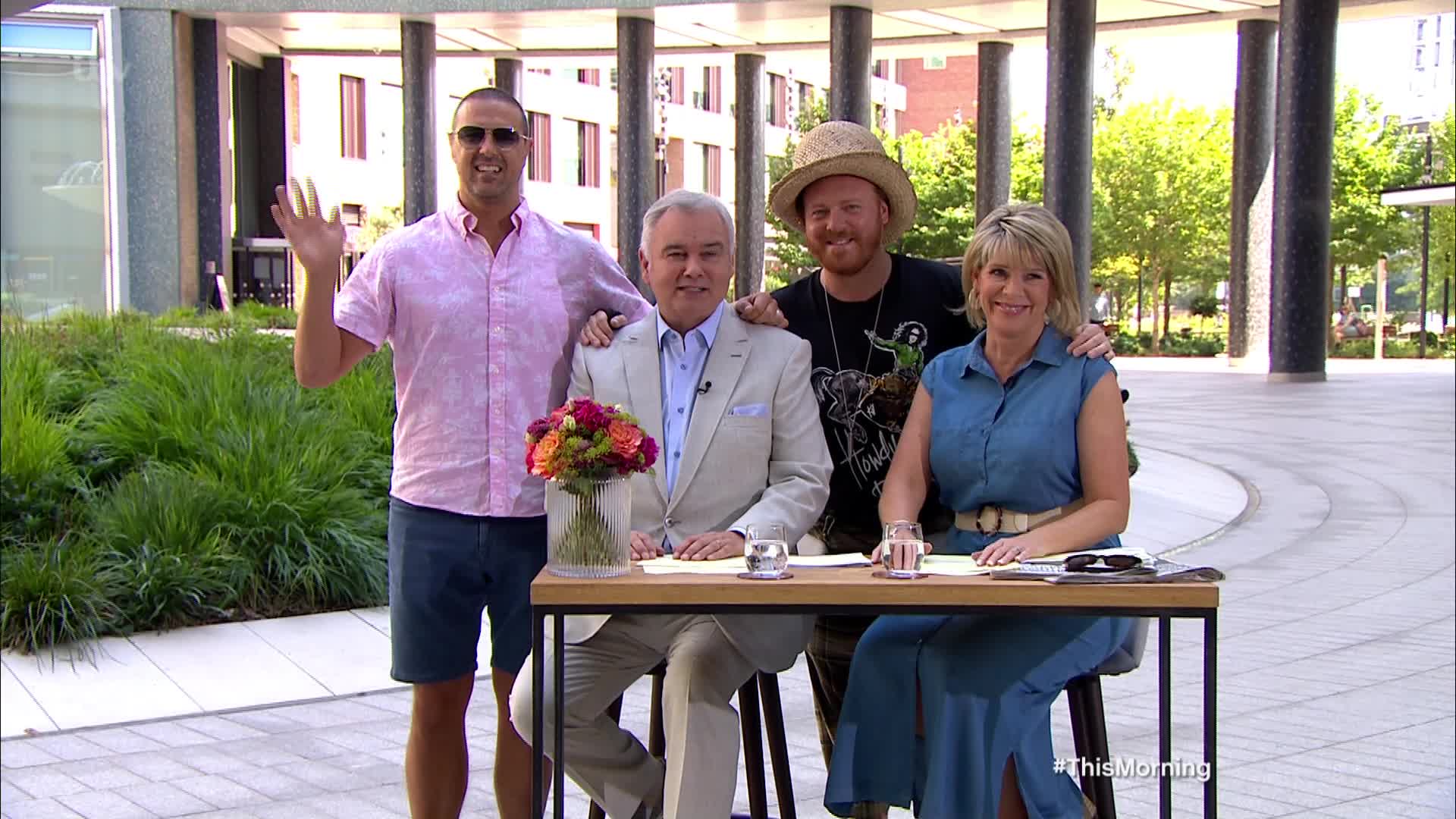 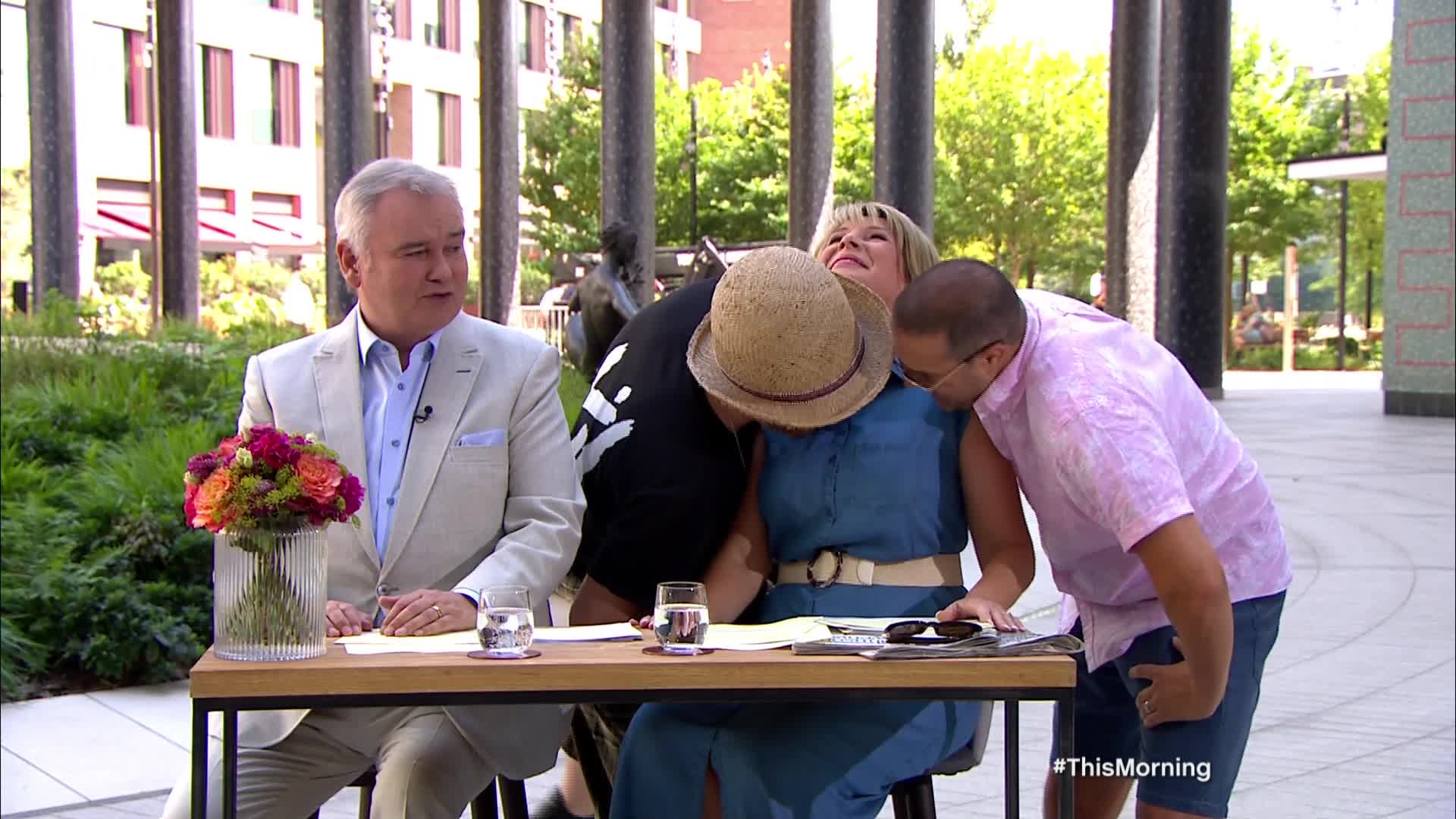 When the show came back from a link, Keith, 46, and Paddy, 45, were stood behind the presenters, grinning and waving at the camera.

“Look who has joined us very unexpectedly” a bemused Ruth told viewers.

“Have a look at these two, they are Keith Lemon and Paddy McGuinness  impersonators,” joked Eamonn. “Are you the real thing or what?”

“We have to speak into your mic apparently” answered Paddy as he leaned into Eamonn’s chest to speak into the microphone attached to his jacket. 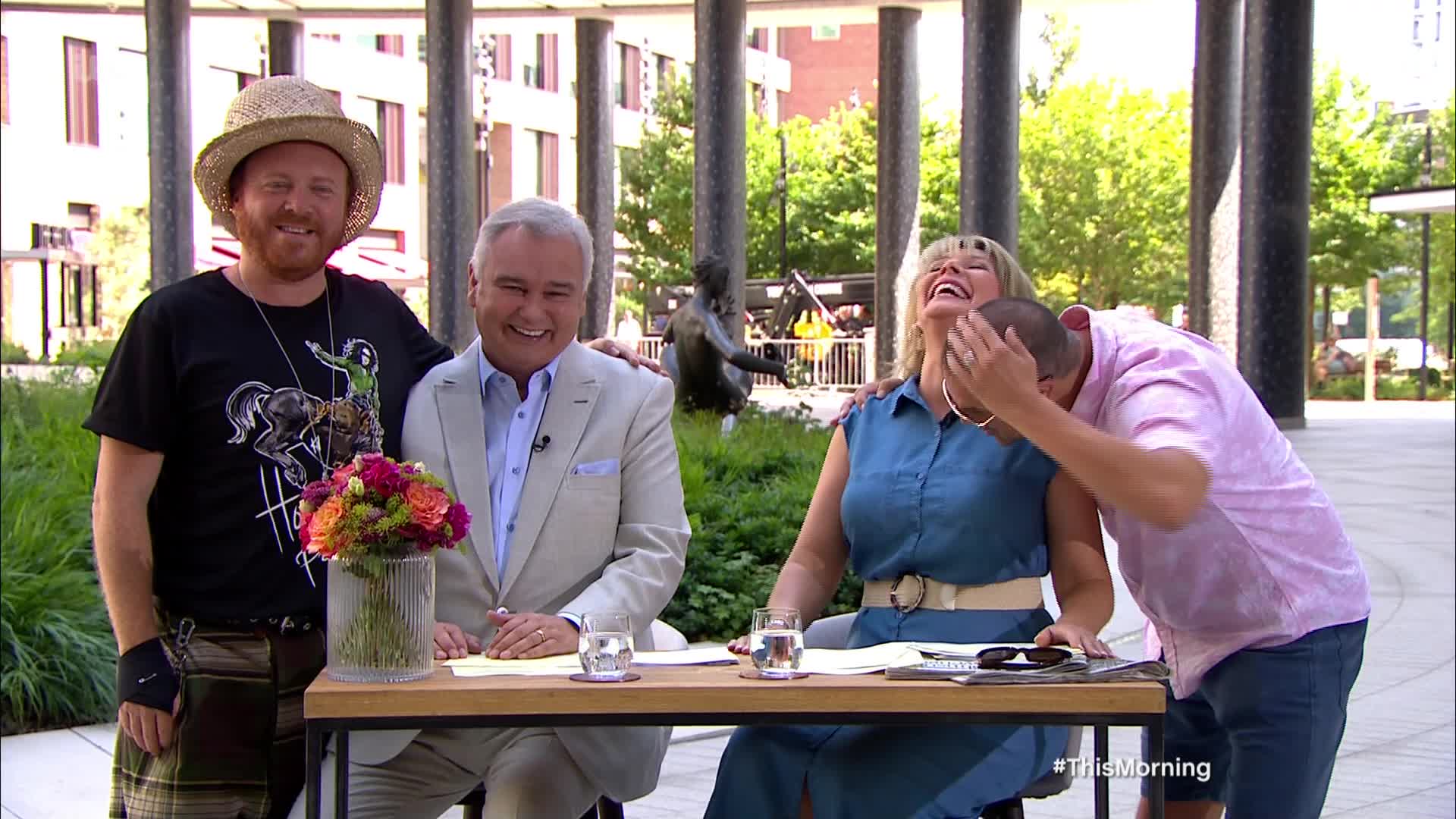 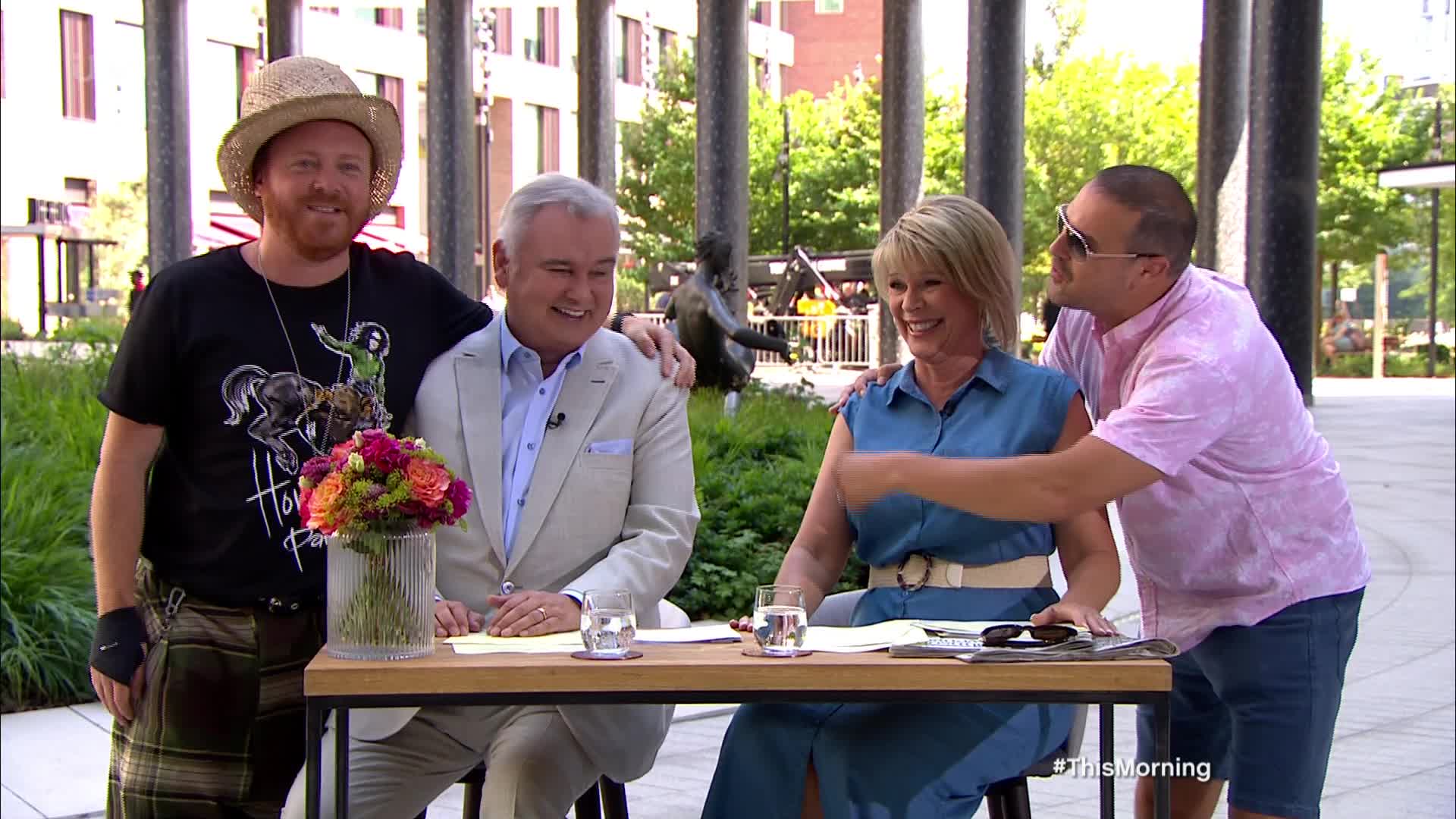 “They literally aren’t on the show, they just turned up,” Eamonn clarified in case any viewers were confused by the Keith and Paddy Picture Show stars’ unexpected appearance.

“We’re not mic’d up Ruth,” Keith then said, leaning into Ruth’s mic on her chest so viewers could hear what he was saying.

Paddy then decided that position looked better and swapped places with Keith.

“Don’t get the top of me head in,” Paddy said as he crouched down to Ruth’s bosom. “But it’s worth it to speak into Ruth’s mic.” 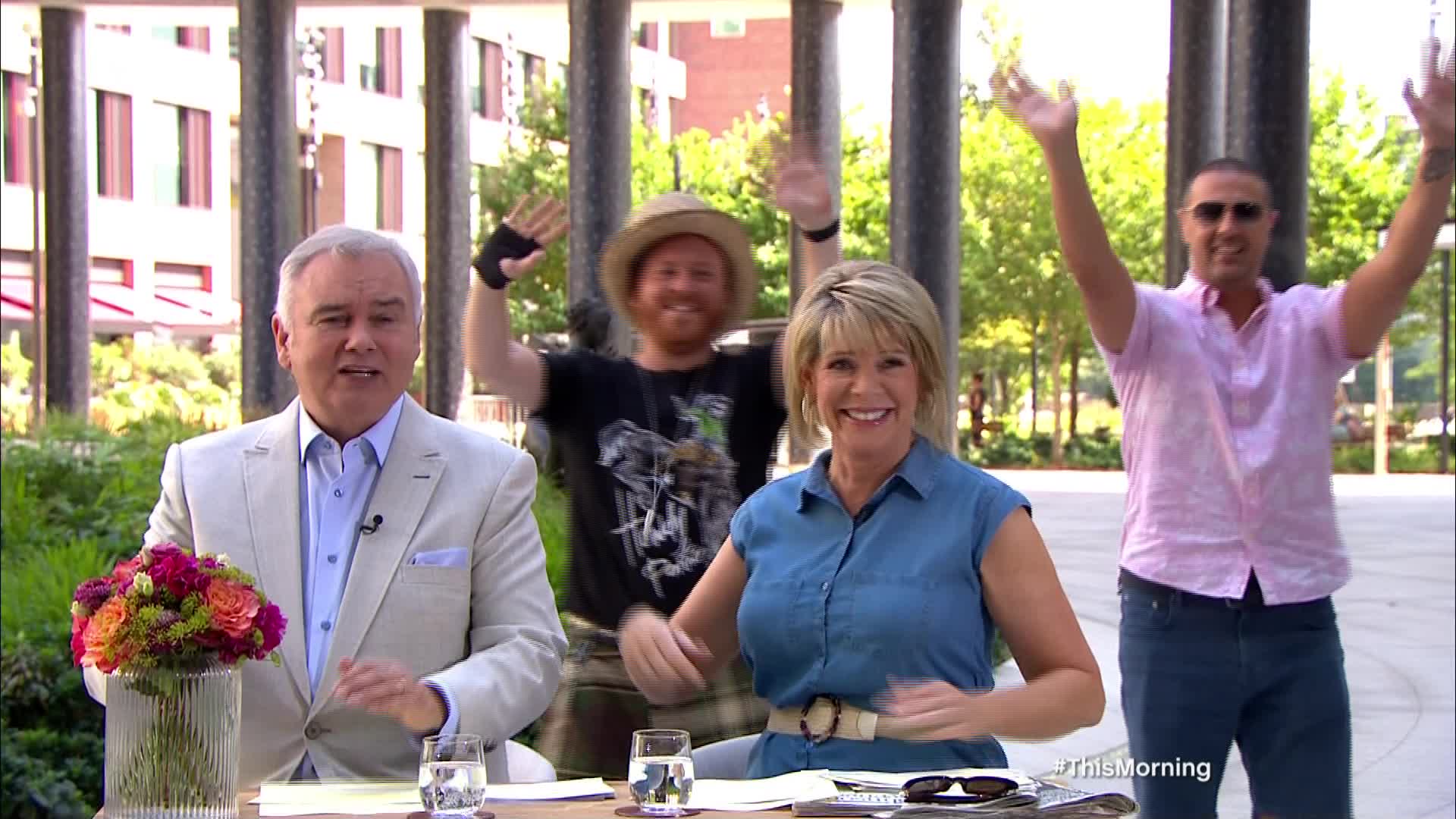 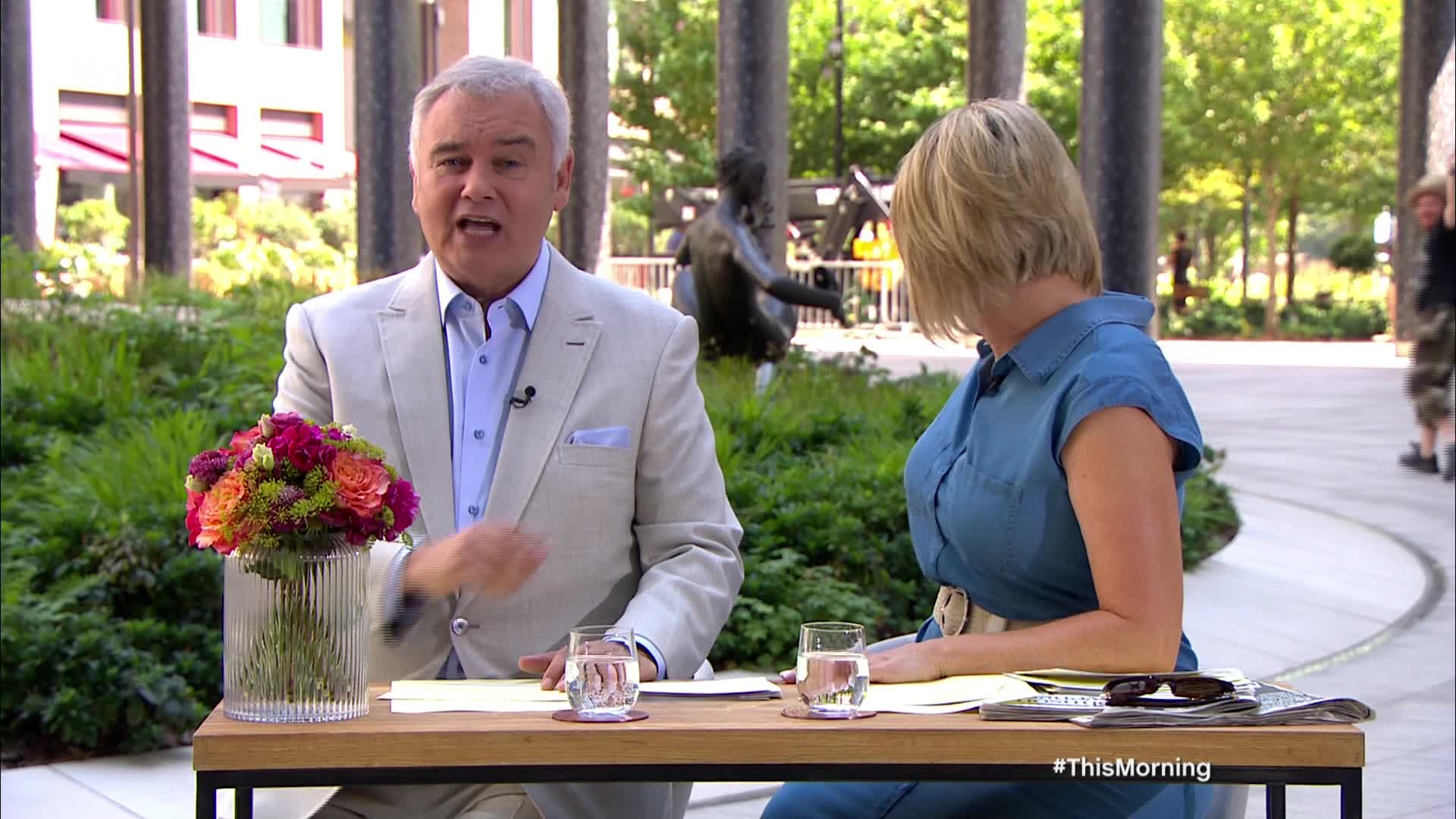 When Paddy then told Keith that Ruth’s mic was better, both of them then rounded on Ruth and spoke into her chest.

The surprise cameo didn’t last long though as the naughty pair announced they were going to hit the bar.

“We’re off for a drink,” said Paddy before waving goodbye to the camera.

“Are you actually working, you two?” question Eamonn, to which Keith answered: “Just hanging out.”

In for a Schilling?

Eamonn then explained to the audience at home that the show’s filming location means they often bump into random celebrities.

Eamonn said: “That’s the magic of working here as Television Centre in London, there are just people in different studios doing different things.”

Ruth added: “I don’t trust them not to come back!”

Eamonn and Ruth, who usually present This Morning on Fridays, are presenting the summer shows while Phillip Schofield and Holly Willoughby are on holiday.

Ruth recently took a short break from the show after the tragic death of her sister, Julia. 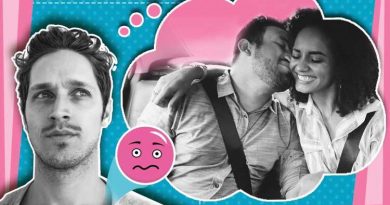 My girlfriend confessed to snogging her boss – where do we go from here? 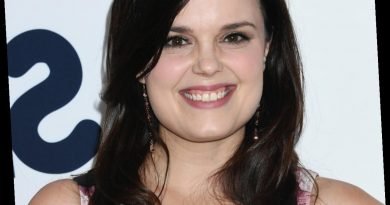 Where Is Marnie From ‘Halloweentown’ Now? Kimberly J. Brown Embraces The DCOM