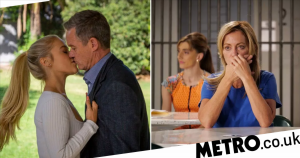 It’s a week of horror for the Neighbours lot as Paul Robinson (Stefan Dennis) stares death in the face and Dee Bliss (Madeleine West) is confronted with the heartbreaking truth.

Somebody wants Paul dead and they’re about to go to great lengths to make it happen. But though Paul has more enemies than he’s had hot dinners, who would really want to attempt to kill him off in cold blood?

Dee learns the truth about her family and who exactly the red headed lady is. It’s a devastating outcome for a woman who’s had such a troubled past. Can she and Toadie (Ryan Moloney) move past it?

Things aren’t looking too good for Amy as she realises her feelings, Bea’s holding in a huge secret, and Roxy goes to extremes to get what she wants, at a huge cost.

Here’s what’s coming up next week in Neighbours.

Paul and Sheila are going hell for leather in trying to get Amy to dump Gary in favour of Kyle. They use the bachelor auction to make her see what she’s missing, getting Kyle all suited up for the occasion. As Amy realises other women are now after Kyle, she finally admits the truth – she has feelings for him and they just won’t go away.

2. Dee gets her DNA results, and the full truth

As the DNA results loom, Andrea once again tells Dee about the red headed woman and decides she must be their real mother. Toadie and Dee aren’t convinced and Dee is reeling from the idea she might not be a Bliss after all. And then the results arrive so they head off to the prison…

The results confirm Dee and Andrea are twin sisters and Heather is their mother. The full truth slowly unravels when Heather is put under hypnosis, she had a traumatic birth at a shelter, which saw a nun take one of her babies and give her away! Toadie goes on a mission to track down the nurse in question, but is anyone ready to hear the further truth she has to tell?

Paul’s thrown when he learns Harlow is still trying to contact her dad but Terese helps him see that he needs to let her do this. He finds a way of talking about Rob with his granddaughter and they bond when he lets her read a letter he wrote to Rob when he was diagnosed with cancer years ago. Is it enough to bring them together?

Gary is unaware of Amy’s feelings and discovers a cheap honeymoon deal that to take advantage of would mean bringing their wedding forward. Paul gets wind of it and goes to drastic lengths to implicate Gary in some underhand dealing to get Amy to dump him. and the tactic works as she starts to wobble. But Kyle overhears Paul and Sheila discussing the plan and is left with a huge dilemma – keep quiet and win Amy back, or do the right thing and risk losing her for ever?

Gary finds out and his fury is palpable and Kyle witnesses his seething anger at Paul. How far will Gary when he lets his pent up rage fly?

Roxy is desperate to contact Vance and her plans to get him back drive Leo mad, to the point he wants her out of his business. Roxy is later dealt another blow when Terese tries to get Roxy’s parents to visit but they cancel – because they’re separating. Feeling alone and desperate, Roxy starts to resent Terese for seemingly having everything while she’s lost it all. To teach her a lesson, she decides to throw herself at Paul. How will he react?

Things have got seriously hot between Bea and Finn and they decide to tell Karl and Susan. But Susan says something to put her off and Bea chickens out. Finn sees her struggling with the truth so he agrees to keep their romance a secret. But what will happen when it all comes out?

There’s horror in store for Ramsay Street as Roxy discovers Paul having been left for dead by the lake with a wound at the back of his head. He’s rushed to hospital and has surgery to stop internal bleeding. It’s looking bad, and it’s touch and go through the night. There’s relief when he starts to come round, but there’s further shock when he points the finger – at Gary. And everyone is horrified when Roxy corroborates his version of events – Gary is his vicious attacker! 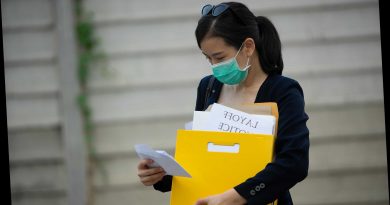 Redundancy rights: How much notice must your employer give before making you redundant and do you pay tax on the payout? 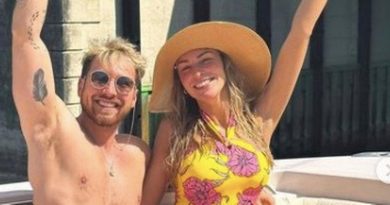