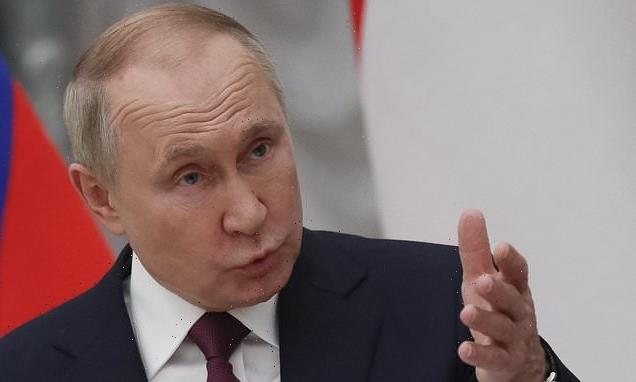 ANDREW NEIL: If Putin gets the bullet in the head he fears, the West can’t repeat its mistakes of the past

More than three weeks into his unprovoked invasion of Ukraine, President Putin is still no nearer anything that looks like victory. Astonishingly, it is even possible he is staring defeat in the face.

Whatever the military outcome, Putin faces one of only two prospects: his demise, possibly bloody; or a future as an isolated global pariah with whom almost nobody will deal.

Certainly, the longer he clings on in the Kremlin, the more he will impoverish Russia. Economic sanctions will only get tighter as his military machine in Ukraine acts in ever more brutal ways. 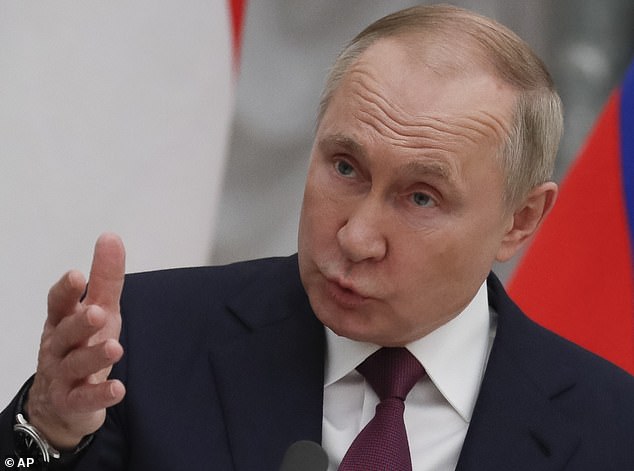 America and its Nato allies have already made it clear to those who matter in Moscow that there can be no return to anything resembling ‘normality’ as long as Putin remains in power. That could embolden some to act.

The Russian blitzkrieg, which was meant to overwhelm Ukraine in a matter of days, never got off the ground. The UK’s latest defence intelligence assessment reports that Russian advances have ground to a halt for more than a week.

The Russian airforce still does not control the skies over Ukraine, and its navy seems to be baulking at amphibious landings on Ukraine’s Black Sea shores.

Meanwhile, Russian casualties continue to mount, with U.S. intelligence estimating 7,000 Russian dead so far. Ukraine claims the death toll is twice as high. Even the lower figure, after only four weeks, is more than America’s total losses after 20 years in Iraq and Afghanistan.

But given that not all incapacitated vehicles have been visually documented, the actual count will be much higher. Even as things stand, the number of tanks lost is already the highest in any military action since World War II.

And the scope for reinforcing the troops currently on the ground in Ukraine is diminishing by the day. With 75 per cent of its Battalion Tactical Groups — the Russian army’s basic fighting unit — already deployed, sending in more effectively leaves much of Russia defenceless, in terms of conventional forces.

As Phillips O’Brien, professor of strategic studies at St Andrews University, says: ‘Russia could no more attack Nato at the moment than it could attack Mars.’

True, much of Russia’s invasion force remains intact. But they are running out of food, fuel and ammunition. Russian military logistics are so poor that re-supply is in doubt.

This will further undermine their morale, which is already low. At the outset, Putin assured his military commanders that sending columns of heavy armour into a friendly nation would be a walk in the park. So the ferocity of Ukrainian resistance came as something of a shock. 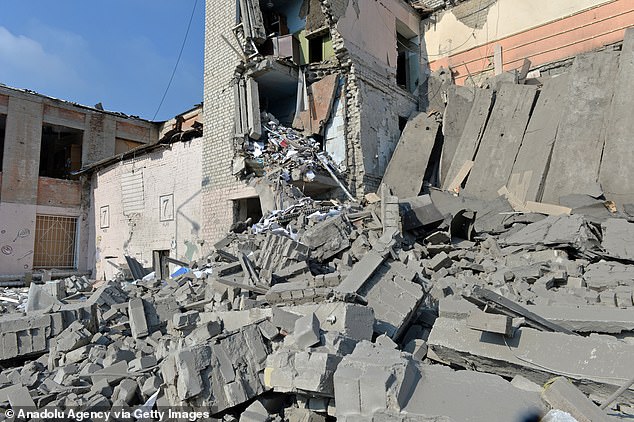 A school, pictured today, in the outskirts of Kharkiv, Ukraine, destroyed after Russian forces’ shelling

So did the appalling performance of the Russian armed forces. They have failed to operate as a combined military force, with poor command and control, a breakdown in encrypted communications (with the result that Nato intercepts their exchanges and passes them on to the Ukrainians) and useless leadership.

Generals almost never die on the battlefield in modern warfare but four Russian generals have managed to get themselves killed by venturing too far forward in a desperate bid to sort out the chaos at the frontline. Putin, in fits of fury, has sacked eight more.

Before the invasion, U.S. and UK intelligence intercepted communications between tank commanders querying if they were really expected to go to war with a bunch of conscripts. They were told Putin had assured them that Ukraine would welcome the Russian army as saviours. Nobody around him felt able to gainsay that nonsense.

It therefore came as something of a shock to the conscripted men, who had been told it was just a big military exercise, that they were invading a foreign country and expected to kill people.

Ukrainian resistance has rightly won the respect of the world. But it would have been much less effective without American and British support.

After Russia’s invasion of Crimea in 2014, U.S. intelligence assessed that Ukraine proper could be next. The CIA set up a training camp in the east, with the British later following suit in the West.

In recent years, Ukraine’s military has been taught how to wage unconventional war in small, mobile groups with devastating weapons against a Russian army trained to fight en masse and therefore vulnerable to ‘shoot and scoot’ guerrilla warfare.

Of course, it is still possible for Putin to secure a victory of sorts by razing Ukraine’s towns and cities, as he’s done before in Syria (Aleppo) and Chechnya (Grozny).

But even a scorched-earth victory would leave Putin facing an urban insurgency for which Ukrainian forces have been specially trained.

Because Western intelligence underestimated how well Ukrainians would resist Russian invasion, they concentrated on training them for a post-invasion war of attrition. If that’s what comes, they have the skills and resolve to mount it. And weapons are pouring in to arm them. 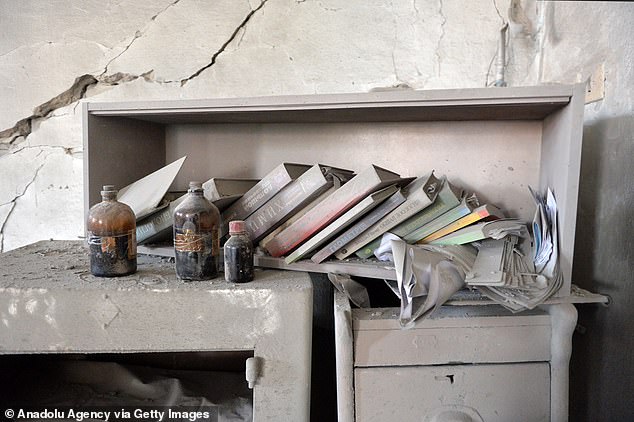 The destructed aftermath of a school in a residential area near Kharkiv after it was wrecked by Russian troops’ shelling, pictured today

It all adds up to the Russian military’s worst nightmare. To prevail in such circumstances Western military experts reckon the invading force needs a superiority of around of 25:1 — in other words, 25 invaders for every local defender. Russia could only muster around 4:1.

One U.S. intelligence assessment suggests that Ukraine’s forces could reckon on killing eight Russian soldiers a day and, over time, that cost would be impossible for the Russian public to bear. The current ‘kill rate’ is far higher.

As the grip of sanctions tightened, Putin’s ability to replenish his military would weaken. More than 1,000 missiles have been fired at Ukraine.

Sanctions will make it hard to replenish that arsenal. Particularly as the West has already cut off the Kremlin from the portion — approximately half — of the $640 billion ‘Fortress Russia’ fighting fund he invested in the West. There has also been a mass exodus of Western companies from the Russian market. Even Europe is now working on ways to reduce its dependence on Russian oil and gas, thereby reducing the Kremlin’s main source of cash.

No democracy and no self-respecting business that wishes to retain its ability to operate in the West will be able to deal with Russia as long as the current Russian president remains in power.

Putin’s mission was to re-establish Russia as a Great Power. It is one of the ironies of his Ukrainian escapade that not only does its failure mark the beginning of the end for him, it signifies the relegation of Russia from the ranks of the world’s superpowers for at least a decade, if not a generation.

Even China looks to be having second thoughts about its previously unstinting support of the Moscow regime. Its state media are now broadcasting footage of Russian war crimes. The Chinese ambassador to Kyiv said this week: ‘We’ve seen how great the unity of the Ukrainian people is’.

President Xi has been left in no doubt that if he sends military aid to Putin he too risks sanctions.

So it’s hardly surprising that Putin looks and sounds not just increasingly isolated but increasingly deranged. This week his broadcast to the Russian people was full of neo-fascist meanderings about ‘self-purification’ and the ‘cleansing of the nation’, with internal enemies being ‘spit out like flies’.

But he remains a force to be reckoned with. He is in charge of monstrous arsenals of nuclear, chemical and biological weapons; though whether he could ever deploy them is another matter.

We do not know if and when he will be removed from office; but he must surely live in constant fear (rightly) of an assassin’s bullet.

Resistance certainly appears to be growing on the home front despite his increasingly draconian penalties for anyone with the temerity to even mention the word ‘war’ let alone protest against it. 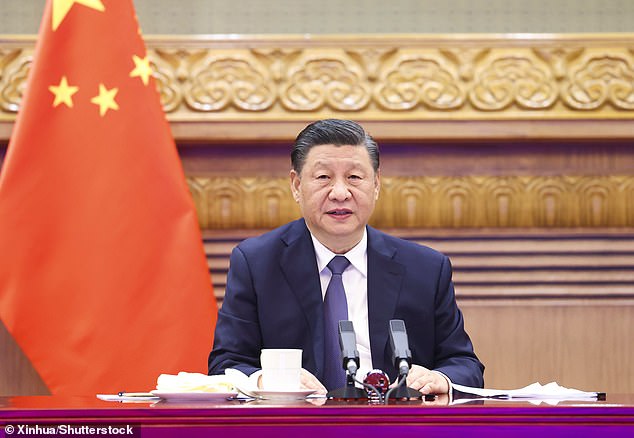 Andrew Neil writes: ‘President Xi (pictured) has been left in no doubt that if he sends military aid to Putin he too risks sanctions’

If Putin’s days are indeed numbered, and the Kremlin falls into more civilised hands, then the West must be ready to react with a positive spirit and helping hand.

It must learn from the mistakes it made during Russia’s last brief flirtation with democracy in the 1990s, when all manner of hucksters flooded into Moscow pushing policies that denuded the Russian people of their wealth and assets.

Above all, the West needs to remember that Russia went from centuries of tsarist tyranny to Soviet despotism without trying anything in between. There is almost no experience of democracy in Russia and we know democracy takes its time to put down roots, especially in unfertile soil.

So the West will need a longer-term strategy to embrace a post-Putin Russia and bring it for ever into the democratic community of nations. It will not be easy, but there is no alternative.

As long as Russia is in the grip of kleptocrats and dictators there can be no settled peace in the world. 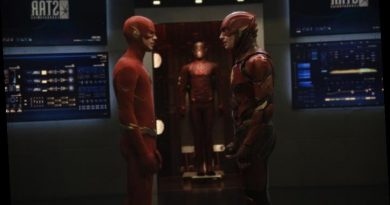 ‘Supernatural,’ ‘The Flash,’ and ‘Legacies’ Season Endings Pushed Due to Coronavirus 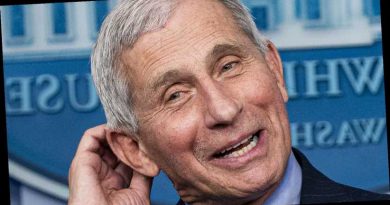