Home » Alex Polizzi opens up about her struggles with hotel renovations 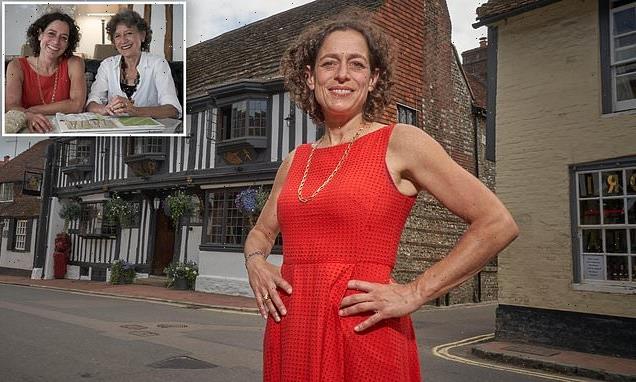 The Hotel Inspector’s own hotel nightmare! New show follows Alex Polizzi’s race to renovate Grade II Listed inn within 6 months to start paying back a £3.5million loan (and that was before Covid hit)

She’s known for her sage advice to struggling hoteliers, but a new documentary has revealed how Hotel Inspector star Alex Polizzi became embroiled in her own nightmare as she struggled to renovate a historic inn with spiralling costs.

Alex, who is the granddaughter of the famed hotelier Charles Forte, bought The Star Inn, in Alfriston, Sussex, a 37-room Grade II Listed building dating back to the 1400s, with her mother Olga in 2019 for £2.5 million.

Alex Polizzi: My Hotel Nightmare, airing tonight on Channel 5 at 9pm, follows the mother and daughter and their team as they attempt to renovate the hotel in six months at a cost of £1 million, with plans to open the renovated premises to customers in April 2020.

Although Alex is known for her show Hotel Inspector, where she visits struggling hotels around the country and tries to turn them around, she was herself beset by spiralling costs and delays to the project – and that was before the Covid-19 pandemic even hit. 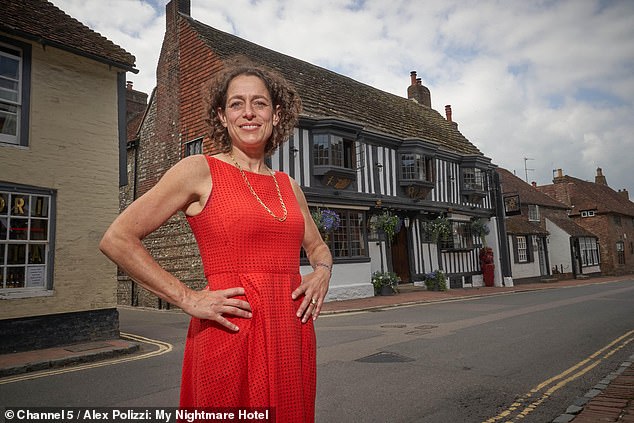 Alex Polizzi: My Nightmare Hotel, airing tonight at 9pm on Channel 5, follows The Hotel Inspector star Alex, pictured, as she struggled with renovating the Star Inn, in Alfriston, Sussex

Alex, who helps run her mother’s two luxury hotels, including the Hotel Tresanton in Cornwall and Hotel Endsleigh in Devon, convinced Olga to make her an associate on this project.

At the start of the documentary, in November 2019, Olga already had some reservations about the renovations, which required a huge financial commitment.

Her two hotels, in Cornwall and Devon, had just been paid off in full, meaning she was starting to make a profit from them.

But she decided to go into debt and borrowed £2.5 million to finance the renovation of The Star, a Grade II Listed Building with parts dating back to the 1400s and more modern extensions added in the 1920s and 1960s. 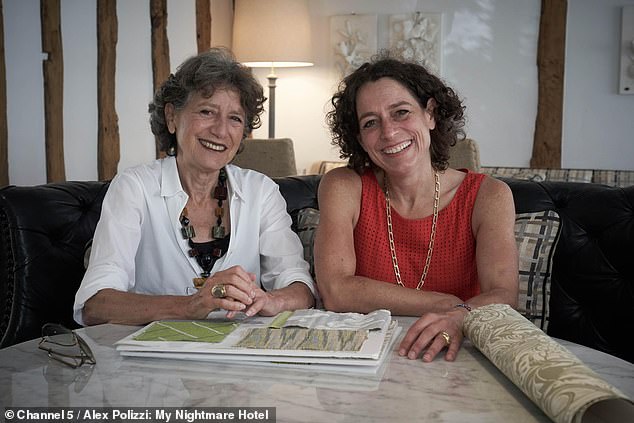 Alex, right, was collaborating on the project with her mother Olga Polizzi, left, who runs several, successful hotels around the country and is the daughter of the hotelier Charles Forte

While the listed parts of the building only need redecorating, the more recent additions needed to be entirely stripped and redone.

‘I really didn’t want to do it, if Alex hadn’t wanted to do it, I wouldn’t have done it,’ Olga said.

However, Alex claimed her mother never does anything she doesn’t want to do, saying: ‘I didn’t push her into it, a project like this put a strain on any relationship and I’m quite nervous about that too.

‘I worked for my mother before but this is different because I’m putting in quite a lot of my own hard earned money that I put aside over the years.’

Due to their bank loan, Olga and Alex needed the renovations to go smoothly in order for the hotel to open before the summer season so they could start making repayments.

‘At the moment is seems quite doable, slightly daunting but doable,’ an optimistic Alex said. 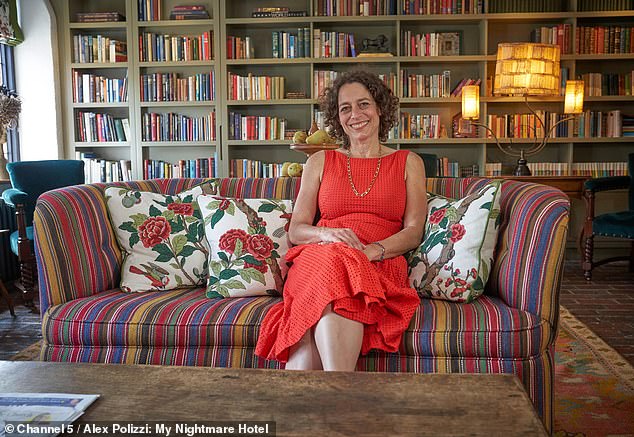 Alex admitted at the beginning that she bought the inn in the hope that everything would go smootlhy, and she wouldn’t need to pay extra for unexpected repairs

‘We’re buying it on faith it’s all going to be okay in the end,’ she said, blissfully oblicious at the time that her six-month schedule would be completely ruined by the Covid-19 pandemic in 2020.

As Alex’s builders finally start working on the site, more and more issues began to emerge.

The hotel manager found out that all the windows around the buildings needed repair, and some had to be completely replaced, costing more money than she’d budgeted for.

In a ‘disastrous’ turn of events, she also took a closer look at the flat roofs over the 1960s parts of the buildings, which had never been repaired, and were covered in moss.

‘The more they bring down, the more they expose and the more you see needs doing. I feel quite faint,’ Alex said.

As early as mid December 2019, three weeks after the works started, Alex hds to renounce her plan for an early summer opening and admitted to her mother and their team that they wouldn’t be able to open before July.

‘I’ve literally no idea if it’s going to be open for the summer,’ she told them, adding: ‘At the moment it is more a hope than a promise.’ 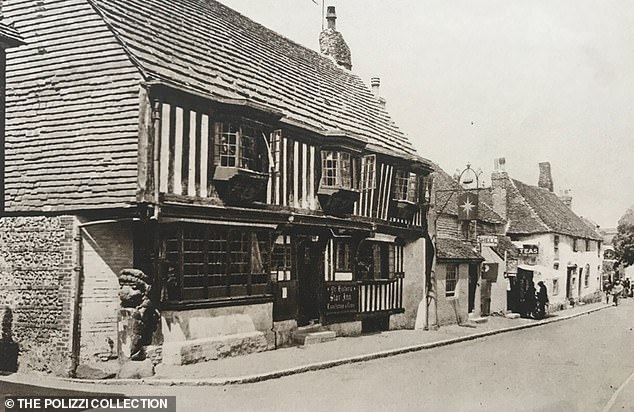 A look at the inn in an archive picture. The front of the inn, pictured, dates back to the 1400s, while extensions on the other side were added in the 1920s and 1960s

In January 2020, more surprises arose with the demolition of the 1960s quarters  under way.

The piping system was corroded and needed to be replaced, and the water pump was not strong enough to bring hot water to all the rooms.

This meant more repair costs, on top of the price of the flat roof renovations, which Alex said made her mother ‘scream in horror.’

But Olga and Alex didn’t give up, crediting their farther and grandmother Charles Forte, the grand hotelier, for giving them a strong work ethic.

‘He was incredibly tough, we were all terrified of him,’ Olga said. ‘But when the chips were down, he was always on side.

‘We were made wealthy by his hard work and that is something to live up to every single day,’ Alex explained, saying she had ‘big shoes to fill’.

‘To work hard, try and be successful, try and make sure you’d make him proud, him and my mother are my guiding stars,’

But as the problems around the inn’s structure began to pile on, Alex became less confident. 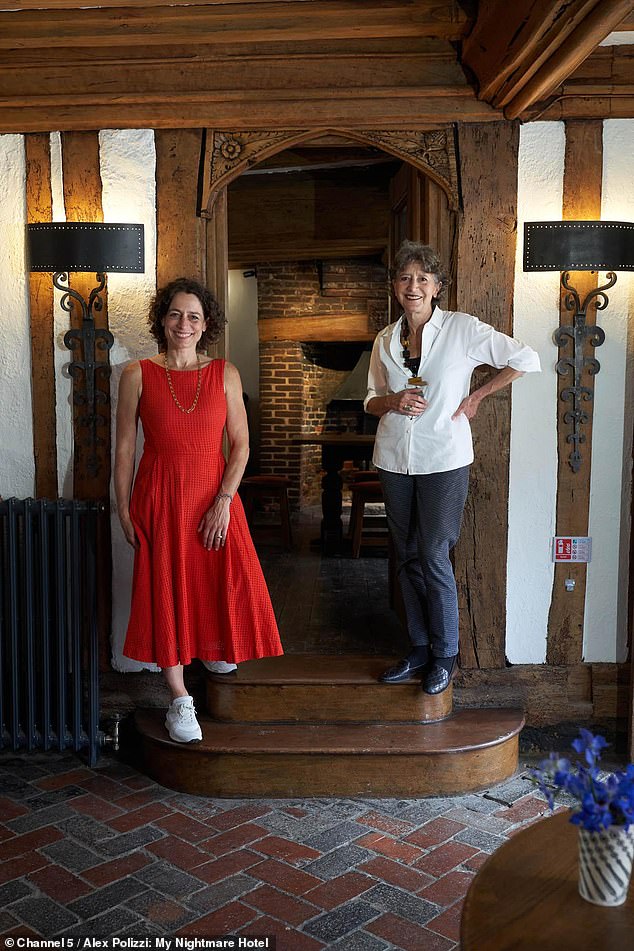 Alex and Olga, pictured, borrowed £3.5 million in order to buy and redo the Inn, and were in debt at the beginning of the project

‘What have I done? That is the bit that’s trying not to show not too evidently, but I ‘m wondering why on earth I took on this,’ she said.

‘At the moment I feel completely overwhelmed by the scale of it, and every decision I make is money that we’re spending and that I hadn’t allowed for in the budget.

‘I’m really anxious but I brought this on myself as they say.’

Redecorating the listed parts of the hotel was tricky because they needed planning permission from the local authority.

They also decided to get rid of some of the central extension in order to build a courtyard to accommodate visitors for drinks and dinner al fresco during the summer.

This brought on the first complaint for the community about Alex’s project, which had been very well received initially.

‘I’ve had my first complaint from a neighbour about the noise and the unacceptable language of the builders,’ she said. 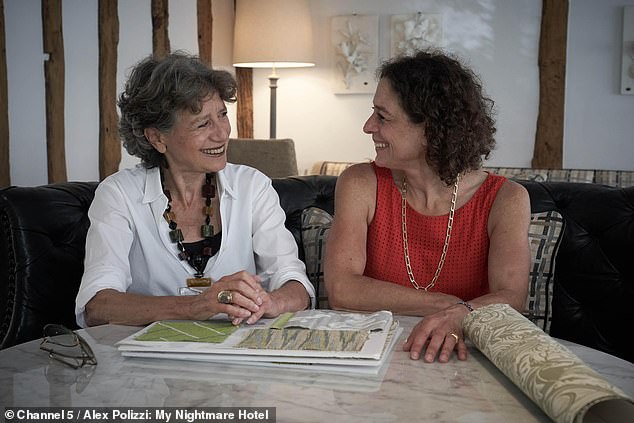 Olga admitted in the programme she wouldn’t have taken on the project, were it not for Alex’s determination

‘I’ve just got to man up and neighbours are going to have to understand that there’s no making of an omelet without the breaking of the eggs.’.

As Olga visitedthe site to see how the team was getting on with the renovation, she heard that fixing the bathroom system would cost £73,000 and fixing the corroded pipes a further £60,000.

She tried to push the team to do the work for less, but was told there was little chance of the price going down.

For this reason, Olga and Alex decided to borrow even more money in order to get more wiggle room.

‘Mum has borrowed some more money and that is going to help tremendously because we were just panicking about how much more it was going to cost,’ Alex sayid.

‘This is not meant to be a vanity project, it’s meant to be a functioning hotel that would be starting to make some money at some point in the future and it feels quite far away still.

With the works finally gathering momentum by mid-February 2020, she told site manager Paul Norton she hoped to open in mid-July.

However, it was only a few weeks before Boris Johnson announced the national lockdown.

‘What makes me nervous is things out of our control,’ Paul told her.

A few days later, the team found a well while digging to install a new drainage system in the hotel’s courtyard.

They needed to inform the local authority, to determine how to proceed, and if it had dated back to the middle ages, it would have put a stop to the building work.

Thankfully, the team were allowed to keep building around the well. 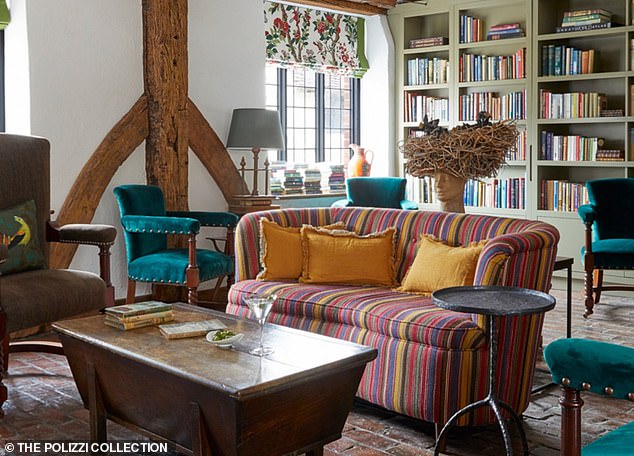 The hotel foyer as it looks now that the hotel’s renovation has been completed, taking 18 months rather than the six month timeframe Alex had hoped for

‘The hotel is such hard work and it’s such physically and morally and financially demanding but it’s also exciting to build something and make something beautiful and to be on the ground floor.’

But, as everything gets back on track on the site, lockdown was introduced around the UK by the Prime Minister.

Alex had to go to Cornwall to oversee the temporary closure of the Tresanton Hotel, while work halted on The Star’s site.

‘The world has changed and I’m not quite sure how the hospitality is going to adapt to manage the new realities yet,’ a defeated Alex said.

‘The fear about The Star is this will obviously delay our opening,’ she added. ‘It wasn’t a great time to borrow 3.5 million pounds.’

Alex Polizzi: My Nightmare Hotel airs tonight and next Thursday on Channel 5 at 9pm. 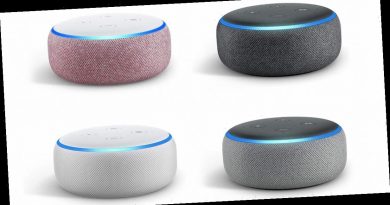 No Joke, Amazon Prime Members Can Get an Echo Dot for $0.99 Right Now 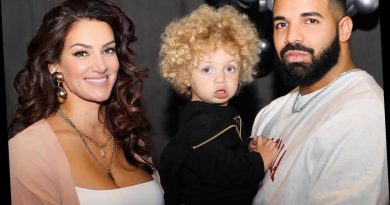