Home » Celebrities » What Now? A Guide to What's Happening Next at Tokyo 2020 Olympic Games 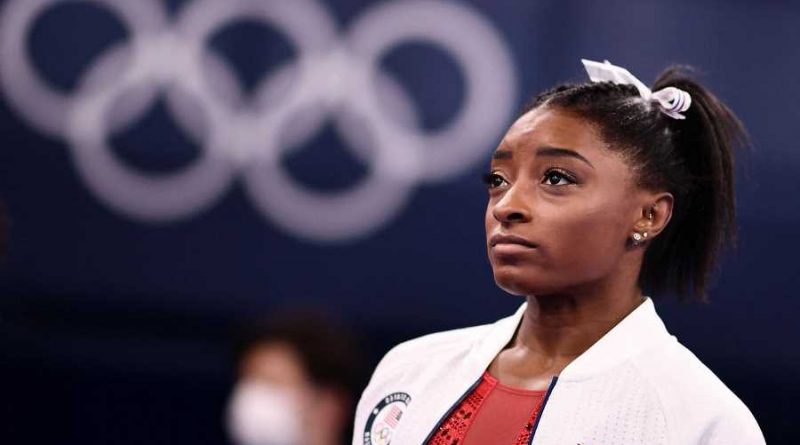 It’s not even halfway through the Tokyo 2020 Olympic Games but the storylines coming out of Japan have been shocking. Every morning, Americans wake up to another surprise victory — or a missed podium.

While gold medals were expected for Carissa Moore in surfing and USA in 3×3 women’s basketball, victories for Keifer Lee in fencing and Anastasija Zolotic in taekwondo shone a spotlight on sports that barely find coverage in a normal Olympics. Not to mention that last-minute surge by Bobby Finke to win the gold in the 800 meter freestyle and break the American record—and Suni Lee’s gold medal victory in the individual all-around.

One of the biggest headlines, of course, has been Simone Biles’ withdrawal from gymnastics in the team and individual all-around. That latest surprise, along with Naomi Osaka’s early outster from the tennis tournament, have forced a much-needed conversation about mental health and athletes. Expect that dialogue to continue beyond the Closing Ceremony, led by the most decorated Olympian of all time Michael Phelps.

Elsewhere, Tom Daley won gold, who used his platform to further exposure for LGBTQ+ athletes worldwide. There is so much to look forward to on the field of play as competition continues — there are another 11 days of competition to go. Below are some of the surprising developments so far, what could happen next, and what else we’re looking to see next in the Games.

With the latest update, Biles can’t tie the record for most individual gold medals won by any athlete at an Olympic Games. However, there are other records the four-time gold medalist could still break or tie, like the most individual gold medals (eight) for any U.S. female athlete or the most gold medals (six) for any gymnast. After Biles, Jordan Chiles, Sunisa Lee, and Grace McCallum won silver in the team event earlier this week and Lee won gold in the individual it’s time for the apparatus events, beginning August 1st. Lee will compete on uneven bars with individual qualifier Jade Carey on vault. Carey takes to the floor on August 2nd and Lee gets on the balance beam August 3rd. Biles qualified for all four events should she decide to compete.

How to watch: live stream begins each day at 4 a.m. ET, with replays available on demand at NBCOlympics.com and primetime coverage that evening on NBC. Ledecky and USA Relays 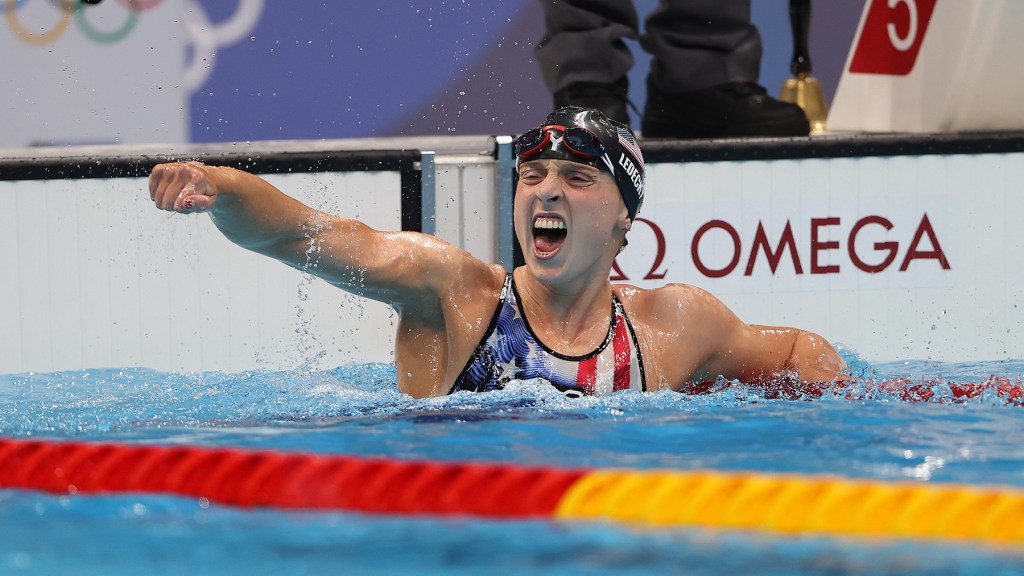 Ledecky’s first race at Tokyo was the hotly contested 400 meter freestyle. It was never a guarantee, but her loss to Ariarne Titmus squashed any potential gold medal sweep of all events Ledecky entered. Next, she placed fifth in the 200 meter free. The tide turned after her and Erica Sullivan won gold and silver in the 1500 meter freestyle. Up next, Ledecky has the 800 meter freestyle on July 31st (it will air July 30th on NBC’s primetime live broadcast). Despite a few hiccups elsewhere (the men losing the 4×200 freestyle for the first time since 2004 comes to mind), Team USA has over a dozen chances to medal in the next four days, including Chase Kalisz and Michael Andrew in the 200 meter individual medley on July 30th (July 29), Caeleb Dressel in the 100 meter butterfly and the debut of the 4×100 mixed medley relay July 31st (July 30), Dressel and Simone Manuel in the 50 meter freestyle August 1st (July 31).

How to watch: semi-finals and finals air every night during the primetime broadcast on NBC, generally starting around 9:30 PM. Prelims are shown via live stream on NBCOlympics.com in the morning at 6 AM, with full replays also available to stream.

Both teams are asserting their dominance (despite an initial hiccup for the men in the first game against France) in a field that the USA has consistently won for decades. Already, the women won gold in the 3×3 discipline against the Russian Olympic Committee. In the five-on-five full-court competition, the women won their first pool game against Nigeria and will next play Japan on July 30th and France on August 2nd. After beating Iran in their second game, the men will play the Czech Republic July 31. Elimination begins for the men on August 3rd and women on August 4th, with gold medal matches set for August 7th and 8th.

How to watch: Matches do air on TV, but shifting broadcast schedules mean your best bet is to watch live or through replay on NBCOlympics.com. Each game starts at a different time. 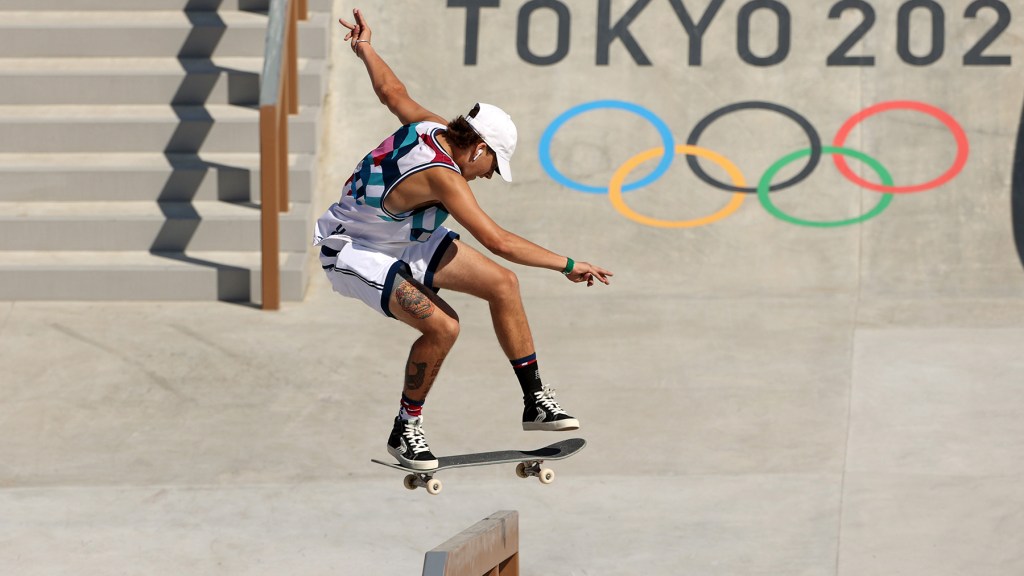 Jagger Eaton of Team USA competes at the Skateboarding Men’s Street Prelims on day two of the Tokyo 2020 Olympic Games at Ariake Urban Sports Park on July 25, 2021 in Tokyo, Japan.

After the street style saw some of the youngest medal winners in Olympic history this week, the competition returns with park style on August 4th for the women and on August 5th for the men. The Americans are some of the best skateboarders here, including Heimana Reynolds and Cory Juneau, who are ranked number 1 and 2 in the world, respectively. The women again have a young field of contenders with 13-year-old Sky Brown from Great Britain and Japan’s Kokona Hiraki, who is 12, and Misugu Okamoto, who is 15. Whereas the street style sees lots of rails and obstacles, the park style takes place in a large bowl that skaters drop in and out of.

How to watch: Due to the time zone difference, qualifying heats begin on August 3rd and 4th at 8 PM ET with finals at 11:30 PM. You can watch on NBCOlympics.com. Broadcast coverage is likely the following day.

There are two disciplines in the Japanese sport making its debut in the Olympics August 5th through 7th. Kata focuses on form, with a panel of judges assessing athletes on their technique rather than fighting an opponent. Sakura Kokumai is the headliner for Team USA, coming in ranked number 6 in the world. Ariel Torres is also a contender. Kumite features one-on-one bouts in weight categories that each last three minutes. Winners are again decided upon through judging. Brian Irr will compete in the +75 kg category while Thomas Scott spars in the -75 kg division.

How to watch: Live streams begin August 4 but an hour later at 9 PM ET with medals awarded the next morning, August 5 at 6:30 AM. That cycle repeats through the morning of the 7th. 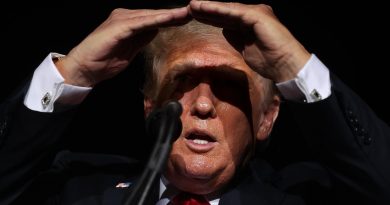 What Do Polls Say About Donald Trump Running For President In 2024? 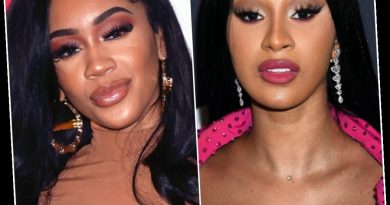 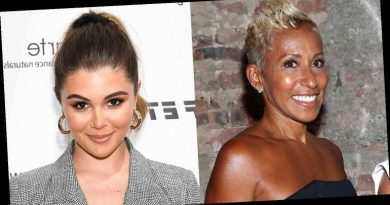