AceShowbiz -A slice of Princess Diana and Prince Charles’ wedding cake is up for sale. The 28-ounce piece, which was given by Queen Elizabeth to a member of her household at Clarence House named Moyra Smith, is said to go up for auction on August 11.

Moyra reportedly kept the slice in a plastic wrap inside a decorative cake tin with a label on top that read, “Handle with care – Prince Charles & Princess Diane’s [sic] Wedding Cake” with the date “29/7/81.” The slice itself came from 27 cakes which were offered at the royals’ nuptials.

The iced cake, which is 8 inches by 7 inches, features white marzipan base. It is decorated with a sugar onlay coat-of-arms which is colored in blue, red and gold. Moyra previously sold the cake to a collector in 2008.

However, it is now up for sale again and is expected to fetch between £300 ($418) and £500 ($697) along with an order of service, ceremonial details and a royal wedding breakfast programme. Chris Albury of the U.K.’s Dominic Winter Auctioneers said in a statement, “It appears to be in exactly the same good condition as when originally sold… But we advise against eating it.” 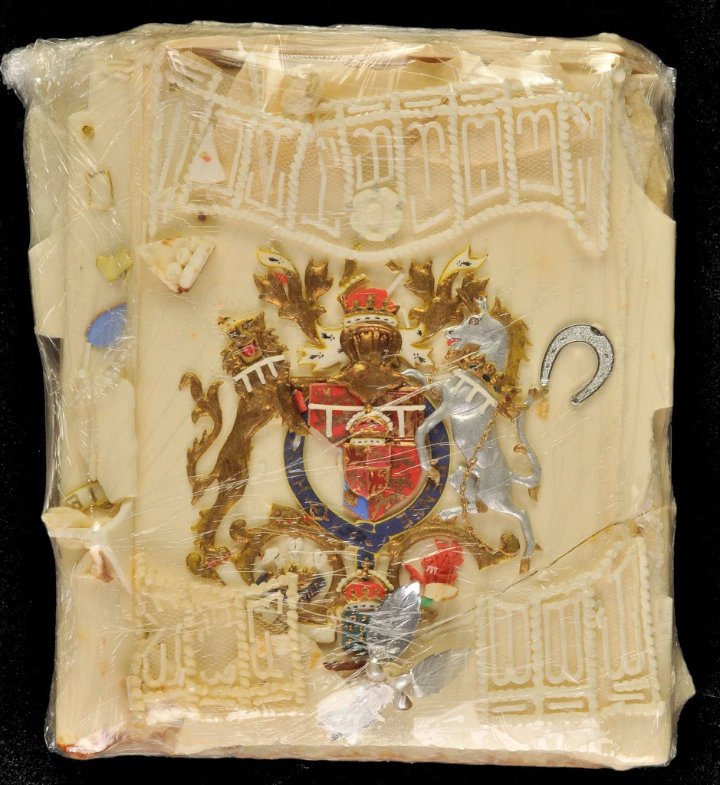 A slice of late Princess Diana and Prince Charles’ wedding cake which is up for sale.

Princess Diana and Prince Charles exchanged vows at St Paul’s Cathedral in London on July 29, 1981. The ceremony was attended by 3,500 guests, with an audience of 750 million people around the globe watching the then 32-year-old prince say “I do” to his then-20-year-old bride.

The pair later welcomed Prince William in June 1982 and Prince Harry in September 1984. The royal couple, however, called it quits in December 1992. They finalized their divorce in 1996.

The Princess of Wales passed away in 1997 following a car accident in Paris. She was 36 at the time of her death. Around eight years later, in April 2005, Prince Charles wed Duchess Camilla.

Update: Irina Shayk Turned Down Kanye West's Invite to Join Him in Paris