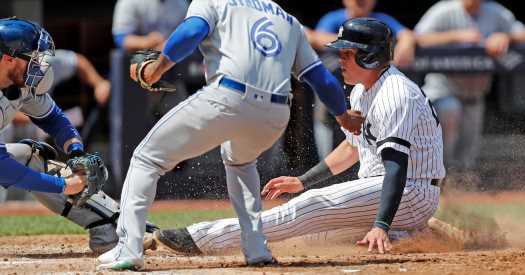 Just before the first half of the Yankees’ season ended last weekend, Manager Aaron Boone was asked which player had surprised him the most. Twice he pointed to Gio Urshela, the defensive-minded third baseman the Yankees re-signed to a minor league deal in the winter to serve as an insurance policy for the infield.

Now in the second half, that policy is still paying dividends. While Masahiro Tanaka provided his usually steady pitching on the mound on Sunday, Urshela did a little of everything else.

“We wouldn’t be in first place without him,” Yankees right fielder Aaron Judge said.

In the Yankees’ 4-2 win over the Toronto Blue Jays, Urshela showed once again that the changes he made to his hitting are not a fluke. He drove in the first two runs of the game with a single off Blue Jays starter Marcus Stroman, an All-Star, in the second inning.

Later, Urshela flashed his trademark vacuum cleaner defense with a slick backhanded stop and throw to rob Lourdes Gurriel Jr. of a hit in the fifth inning. But perhaps Urshela’s most impressive offering of the day was the nifty body-twisting slide in the same frame that took advantage of a wild pitch by Stroman and a slow tag by catcher Danny Jansen. The heads-up play gave the Yankees the lead.

“It hurt me watching it,” Boone said. “It was a very athletic play by him and obviously a very big play at the time.”

The Yankees (59-32) have the best record in the American League and a healthy cushion in their division for many reasons. Urshela, who began the year in Class AAA, was perhaps the unlikeliest entering this season. He has since become a constant, making the season-ending shoulder injury to the standout third baseman Miguel Andujar a distant memory.

“More of what we’ve seen from him all year,” Boone said of Urshela, adding later, “He’s been an impact player for us on both sides of the ball.”

While Urshela keyed the offense and defense, Tanaka, an All-Star, paved the way on the mound. He allowed two runs over six innings on Sunday. While his standout pitch, the split-finger fastball, has eluded him much of the season, Tanaka has been the Yankees’ most reliable pitcher — a 3.81 E.R.A. over a team-high 111 innings — thanks to secondary pitches and guile.

Still, the inconsistencies of the entire Yankees rotation, which ranks slightly above average in E.R.A. but below in innings, have prompted the team’s top decision makers to explore upgrades ahead of the July 31 trade deadline. One potential target, Stroman on the rebuilding Blue Jays, showed why he may be a hot commodity in the coming weeks.

Stroman, a Long Island native who is under team control through the 2020 season, struck out seven and allowed three runs over six innings, raising his E.R.A. to 3.25. While acknowledging that he loved Toronto, Stroman hinted at the allure of home, telling reporters last month, “I’m a New York boy.” 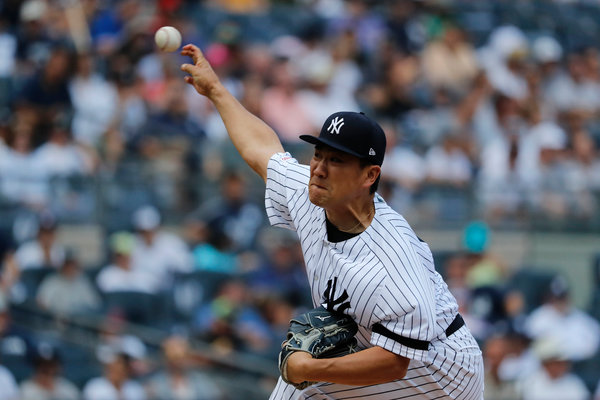 Even though he knows that General Manager Brian Cashman is looking for pitching, Boone has said he believed that the Yankees were already capable of being “the best team in the world.” It has helped the pitching staff that the offense has been among the best in baseball, averaging 5.6 runs a game. And since a rough June, the rotation has pitched better.

“I feel like it’s been underrated all year and a little underappreciated,” Boone said.

While both pitchers are still many weeks away, the news offered a small step toward their anticipated returns. Betances may be back sooner than Severino because he is a relief pitcher. Cashman said in a recent radio interview that Severino was expected to need at least six weeks before a return and that he could be an option in the bullpen if the Yankees run out of time to build up his workload.

“I haven’t begun to put a timeline on what it’s going to take to have him built up to being a starter for us or any kind of option for us,” Boone said on Sunday.

Whatever the composition of the pitching staff, the Yankees will still likely be defined by the depth of their position players.

After shortstop Didi Gregorius returned last month from his elbow surgery, Urshela’s playing time has seen a slight drop. Boone has rotated the surplus of infielders through the lineup and given more regular days off to keep them fresh. Urshela’s batting average has slipped from .360 in early May to .302 after Sunday’s game, but he has still made an impact.

When Stroman threw a low sinker, Urshela smacked it into left field for a two-run single. When Gurriel ripped a ball down the third-base line, Urshela dived to his right, snared the skipping ball and threw a strike across the diamond. When Stroman threw a pitch wide of Jansen, Urshela gambled by racing home.

But halfway there, Urshela realized Jansen was going to beat him to the plate because the ball had ricocheted back. Jansen made the mistake of reaching for Urshela’s body, giving Urshela the chance to contort away from Jansen and reach for the plate with an outstretched left leg. He was originally ruled out, but the call was overturned following a replay challenge by the Yankees.

“I needed to find some way to be safe,” Urshela said. Added Judge, “I haven’t seen anything like that in a while.”

After the game, Judge commended outfielder Mike Tauchman’s diving catch in the sixth inning that robbed Cavan Biggio of a hit. (Tauchman hit a solo home run an inning later that gave the Yankees a 4-2 cushion.) Judge also praised Urshela for his contributions all season long.

“It means I’m doing good stuff for the team,” Urshela said. “And I’m always trying to do that every day.” 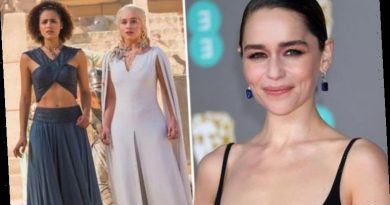 Emilia Clarke steps in to defend Game of Thrones co-star after incident: ‘It got handled’